Our last day in Amarillo we drove to the towns of Mobeetie and Wheeler mainly to visit the site and signage for Fort Elliott.

Fort Elliott (1875-1890) was established to stop small hunting parties of Native Americans from entering the Panhandle and those trying to escape the reservation. In the mid 1880's  the garrison was policing the cattle industry keeping Panhandle stock off the reservation. In 1887 the railroad bypassed the fort and in 1890 the Army closed the fort. The site is on private land and not accessible, but there are roadside markers on Hwy 152 . Old Mobeetie Jail Museum featuring the original flagpole and a jail cel is just down the road. The Museum was closed.

Fort Elliott housed fewer than 200 men and in 1883 a company of 40 Indian scouts were also stationed here. In 1879 a company of the Black 10th US Cavalry was assigned here. Between 1881 and 1884 all of the fort's troops were black with the officers being white with one exception of LT Henry O Flipper, the first black officer to graduate West Point and the son of slaves.

Also on the site are original structure from the town of Mobeetie.


We then drove into the town of Wheeler and took  photos of the Courthouse and Old Jail.


Tomorrow we depart for Tinker AFB in Oklahoma City for 2 weeks. They do not take reservations so hope we get a space. This is our 2nd visit with the first in 2011.

Called and yes they do have space. Linda has been the host for 7 years and very nice. Price is a bargain at only $130/wk with full hookups. The campground is small next to a lake, but well maintained. Next to campground is Express with gas and Dominos Pizza which we got for dinner. Gas is $2.05/gallon and campground laundry only $.50. 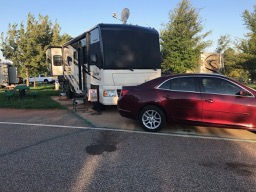 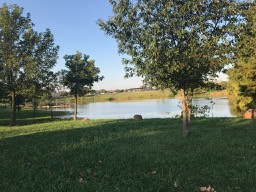 John has a long list of places to visit for his website and next weekend we are driving up to OSU in Stillwater to visit granddaughter Kendyl who is a sophmore.