After departing Taos and lunch at the Guadalajara Cafe  our final stop was the Pecos NHP off IH25 exit 307. Located in the park are the remains of Fort/Camp Lewis, Battle of Glorieta Battlefield signage and remains of Pueblo Mission.

Camp Lewis was established in 1862 and abandoned after 3 days as a  Union camp near Pecos NM and now located in the Pecos NHP on the Santa Fe Trail. It was occupied prior to the Battle of Glorieta Pass by members of the First Colorado Volunteers and one company of New Mexico Volunteers.

Confederate troops occupied Johnson's Ranch at Canoncito and used it as their supply depot and headquarters. When the location was discovered, a command of 400 Union men attacked and burned the Confederates train of 80 supply weapons forcing the Confederates to retreat and back to Texas.

The adjacent Kozlowski's Stage Station was used as a field hospital for 8-10 weeks afterward.


In 1941 Buddy Fogelson purchased the ranch and expanded it to 13,000 acres. In 1949 he married Greer Garson and they actively supported preservation of the area.. In 1991 Greer Garson sold the property  to the Conservation Fund who donated it to the National Park Service.

Returning  back to the Visitor Center we took the path up to the Pueblo ruins. Of course first signage was Rattlesnake warning. Almost turned back, but John persuaded me to continue and glad I did. When we got to the top,saw there was another parking lot adjacent to  the ruins.

Pecos Pueblo (1350-1838)was built on a high ridge and grew into one of the largest and most powerful pueblos and home to 2,000 people.Life at the pueblo was rooted in customs, religious beliefs,farming; however, warfare was common with over 500 warriors in domination. In 1541 Spain sought to colonize and convert the tribe to Catholicism. In the process Franciscan Friars destroyed the kivas, statues and banned Pueblo ceremonies. In 1621 under the direction of Fray Andres Juarez a large mission church was built. By 1680, years of Spanish control,disease, famine and Apache  raids brought about decrease in population of the Pueblo people. The church at  Pecos was destroyed in 1680. In 1717 Spaniards and Puebloans  built a smaller church on the site of the one that had been destroyed. Comanche raids, drought, disease and migration greatly decreased the population and in 1786 a peace treaty was signed. Descendants of Pecos Pueblo moved on  to Jemez Pueblo.

Below are photos of the remains of the Church and Convento and the Pueblo. On going archaeology is continuing. If in the area strongly recommend this a stop. We discovered the ruins by accident as objective was the fort. 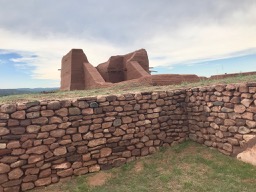