Our drive today took us up Hwy 350 to Hwy 50 to Granada,CO about 150 miles and 15 miles from the Kansas State Line.Drive takes you through the towns of La Junta, Las Animas, Lamar and finally Granada.

In Las Animas we stopped for photo for very impressive Bent County Courthouse. Located near the town is Bent's Old Fort which we visited in Sept 2011.

Our next stop was Bent's New Fort Site which only has stone remains. One look at the site, I decided to remain in the car. Did not want to encounter any snakes and it was 106 degrees. So pictures are compliments of John.

Bent's New Fort was on the Arkansas River on the Mountain Route of the Santa Fe Trail (1849-1860).The fort was built by William Bent who had run Bent's Old Fort near La Junta. It was smaller and not successful as Indian trade was decreasing. In 1860 Troops began construction of Fort Wise later called Fort Lyon a mile SW of the New Fort. The site is on private property with access.

We then drove to site of WWII Granada Amache Relocation Center our last stop. After driving around the site with only one of the barracks, guard tower and water tower remaining we visited the Museum in Granada. 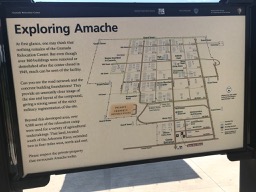 This was the 10th largest city in Colorado with 7500 internees confined to a square mile. It took just over a year to construct the camp with over 1,000 workers including evacuees. The camp was surrounded by barbed wire and 8 guard towers. Inside the barbed wire it was like a large city that included a hospital, police and fire,post office, schools, churches and cemetery. Outside the wire a 16 square mile area ws used to  raise livestock and growing produce and crops.10 percent of the population volunteered for military service serving in the 442nd Regimental Combat Team,Women's Army Corps and Nurses Army Corps. Nearly 36 Nisei lost their lives in the War.Following the end of the war,the agricultural lands were reverted to private farming and ranching and the camp buildings were demolished or sold. For more info go to the www.amache.org site.


It was a long,hot day and got back to camp around 500PM.