Our intent today was to drive up to the AF Academy Recreation area known as Farish in the mountains above the Academy at 10,000, but at the last minute decided to drive into Pueblo to visit the El Pueblo History Museum and Trading Post. Upon arrival we had the feeling that we had been here previously and  after checking John's website realized we visited in October of 2011;however, the museum and recreated trading post was closed.

We got a very informative tour today of the Pueblo Trading Post established in 1842 by James Beckwourth and other trappers.It was destroyed in1854 and rebuilt in 2003. Digs of the original site are ongoing in an adjacent building not open for visitors. The Post was located in Pueblo,CO near the confluence of the Arkansas River and Fountain Creek. The post population decreased from 150 in 1847 to 24 in 1854 at which time on 25 December 1854 it was attacked by a band of hostile UTE Indians killing all but one of the men and capturing the one woman and her two children. The Arkansas River once carved the border between Mexico and the USA.

The reconstructed replica represents typical  features of the trading post. The tour guide gave us detailed examples of the living conditions and activities of the post which featured kitchen, family living quarters, visitor quarters, gathering area and trading post. 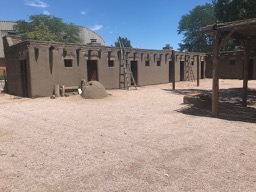 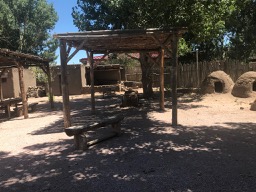 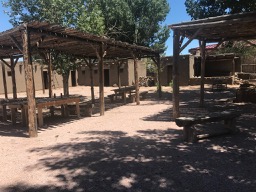 One interesting item pointed out in the trading post featured below had us perplexed..even sniffing it we could not identify. You may note the Chinese writing and when you turn it over see several squares. A hint: Boston Tea Party. Did you guess?
Will give answer at the bottom of page. 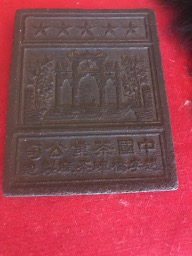 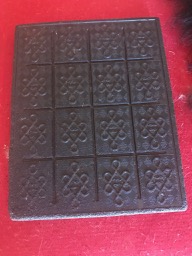 One of the interesting exhibits in the Museum was about the Ludlow Massacre in 1914 that involved the Colorado Coalfield Strike thru the eyes of 9,000 children who endured the strike. Children as young as 3 mos and adults as old as 45 were killed on 20 April 1914. The conflict involved the striking miners, Colorado National Guard and Colorado Fuel and Iron Company guards who attacked a colony of 1200 striking miners and their families. The National Guard used machine guns to fire into the settlement. The chief owner of the mine was John D Rockefeller,JR who it is said orchestrated the conflict. The site is 18 miles north of Trinidad. As a result of the Massacre, Congress investigated the events and in 1915 published the report that was influential in promoting child labor laws and an 8 hr workday. 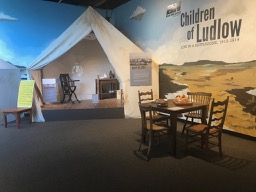 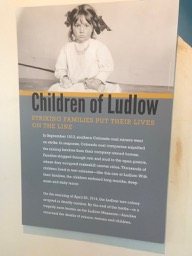 Answer to Tablets:
Known as Tea Brick made of powdered black tea or Hubei. They were also used as currency in China.The squares contained the tea and scaping would produce the tea leaves. These bricks we were told is what was dumped in the Harbor and due to weight elevated the water level. If interested, do a search on tea bricks.

On the way back we started up to to the Farish site located in the Pike National Forest; however, when we got to Manitou Springs a terrific downpour and thunderstorm broke loose and we decided not a good idea. Will save for a better day.

So we stopped at Rudy's for dinner. The line at 330PM was serpentine and it took an hour to place our order. They are out of Texas and have the best barbecue ribs,brisket,pork etc. Very casual and no plates involved, just butcher block paper. If you not experienced, try it.
Posted by Amy at 12:34 PM