Today we drove up MT 87 from Billings to Lewistown  to visit a previous AF Radar Station at the top of Judith Peak and to locate the remains of Fort Maginnis. It was a pretty drive passing miles and miles of Yellow Sweet Clover fields. 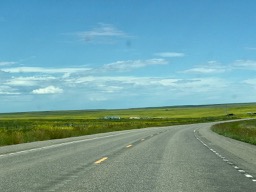 Lewistown is in Central Montana and was the site of an 1880's gold rush. Their motto is "Home of the Big Springs and purest drinking water in the world". Population is around 6,000. It was once the territory of the Blackfoot Native Americans. The town is named after the fort established in 1874 to provide protection for people traveling on the Carroll Trail shortest route between Carroll and Helena.


After a stop for a photo of the Fergus County Courthouse and library, we headed up the mountain road to Judith Peak to the site of Lewistown Air Force Station (1958-1871). The cantonement and housing area were located below the peak near the ghost town of Maiden. Many of the buildings from the Cantonement remain and is now private property. The upper site serves as a communications site with the FAA having a small area. The drive up to the sight was mostly on a gravel and dirt road.

We had our picnic at the top with commanding views of the valley. A thunderstorm was approaching as noted by the photos so we headed back down to find the site of Fort Maginnis located on private property but accessible.


After meandering down back roads across ranch lands and thanks to the docent at the museum in Lewistown, we finally found the site with little remains.

Fort Maginnis (1880-1890) located near the present ghost town of Giltedge to suppress Indian and Civilian rustlers after the end of the Indian Wars and one of five forts build after the Custer Massacre of 1876.There is no signage from the road and we spotted a rusty sign on laying on the road after we crossed the creek;otherwise we may never have found the site. 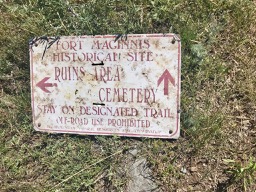 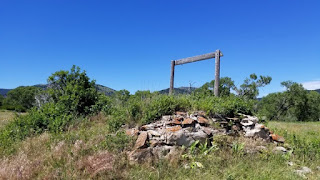 Returning back to Billings we were greeted with a thunderstorm. Fortunately no hail. More rain tomorrow. We depart for Casper,WY on 17th for 3 nights.
Posted by Amy at 11:52 AM