Below are some interesting facts about eagles:

Bald Eagles have an average wingspan of 6-8ft.

Fish make up more than 50% of their diet.

68% Bald Eagle deaths are caused by humans either directly or indirectly such as power lines, wind turbines, colliding with buildings and cars or being shot

Over half million Bald Eagles were present in the 1700's. Chemical pesticides had an impact on their deaths. In 1952 the nesting pairs were reduced to 412 and in 2006 that number increased to 9,800.

They mate for life and reuse the nest year after year and lay 1-3 eggs a year. They mate while free falling

If you find a Bald Eagle feather on the gound, you need a permit to pick it up

When they lose a feather on one wing, they will lose one on the other in order to keep balance

They ride air currents in front of thunderstorms

The above sources were gotten from several different web sites.


In our 6 years of coming here since 2014, I am always fascinated and loved watching them and taking photos.What a magnificent  bird. Have not gotten that one photo of inflight, but will keep trying.

Here are some more photos. 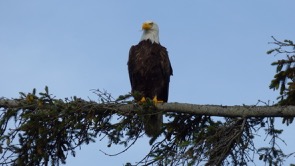 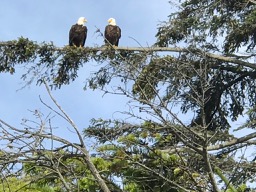