Early departure today from Crescent City,CA to Central Point,OR via Hwy 199 to IH 5 in Grants Pass. Not a drive we would like to do often...very winding, narrow,two lane, but scenic. Fortunately lots of pullouts.

We went to C & C tires to get our new Michelin tires installed. We used them in November 2013 when we had the blowout on the inner back driver's side tire and used the FMCA discount. We then checked in at the KOA Gold Hill for 3 nights;however, due to impending weather of thunderstorms, we decided to stay only 1 night and they graciously refunded the 2 nights. This was our second stay here and would definitely recommend. It is very clean, quiet, FHU and friendly staff.

Left around 930AM for the 188 mile trip to Redmond OR and next stop until the 30th May, Deschutes County Fairgrounds RV Park. A very nice park with concrete pads, FHU, good space between sites and well maintained. Normally we would stay at Hope and Shawn's, but with their new home there are no hookups and turn into property rather tight. Price here with Good Sam is $35. The only place to stay in Redmond.

Our drive today had some rain and again rather precarious taking Hwy 62 to 230 to 138 to 97 into Redmond. Worse part of drive was 62 out of Shady Cove and parts of 230. Got up to 6000 ft elevation and there was still snow on ground. Stopped for picnic on Hwy 97 and John felt the tires were over inflated. He was right as 5 of the tires had 120 PSI instead of the 95-100.
So he corrected and plans on notifying C & C. 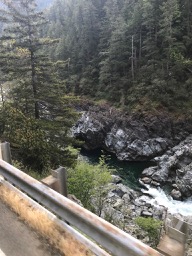 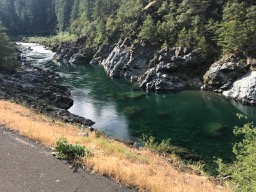 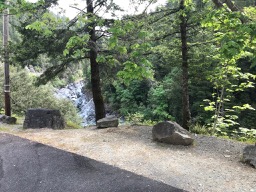 Raining when got to campground and motorhome and car filthy from the drive. More rain expected in the next week. Juniper is in bloom and the pollen is giving John misery. The cedar in Texas had the same effect. His eyes are watering and he just feels miserable.  A slight clearing so we went to see Colt play baseball. His team won 11-5. Cade was practicing on another field preparing for a tournament in Klamath Falls this weekend.

It is good to be back with family. Will go over to Hope and Shawn's tomorrow for dinner.