On our drive yesterday we passed the Memorial to James Dean, but traffic was such that we couldn't stop so we drove back today only 39 miles via Hwy 46 west from Lost Hills.

There are two memorials, one at the Jack Ranch Cafe on Hwy 46 just passed where the fatal accident happened 30 Sept 1955 and the other one along the north fence line at the intersections of Hwy 46 and 41 which contains objects left by fans.


Dean was traveling to a race in his Porsche Spyder with his mechanic, Rolf Wutherich. He had intended to tow the car, but his mechanic suggested that since he did not have enough break in miles that Dean drive it to the races in Salinas. Earlier in the day he was stopped for speeding near Bakersfield. Following him in his Ford Station wagon were Hickman and professional photographer Roth. They stopped at Blackwell's Corner on Hwy 46 just 10 miles west of Lost Hills where they met up with other racers going to Salinas including Lance Reventlow and they all agreed to meet in Paso Robles for dinner. 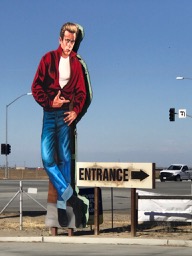 Departing Blackwell's at 515PM and Dean accelerated the Porsche crested Polonio Pass and headed down the Antelope Grade passing many cars. At 5:45 PM a Ford Tudor driven at high speed was headed east on 46 and made a left turn onto 41. Dean seeing the car and an imminent crash tried to steer the Spyder in a side stepping maneuver but due to time and space the cars crashed head on. The Spyder as seen by a witness smashed into the ground and two or three cartwheels ensued.Several witnesses stopped and tried to help, but Dean was killed immediately. He suffered many broken bones including his neck.

His mechanic survived with serious bone injuries.The driver of the Ford suffered minor injuries. Hickman and Roth arrived at the accident some 10 minutes after the crash and Hickman helped in extrication Dean. Roth took pictures of the accident.

The Memorial at Jack Ranch Cafe was designed by Seita Ohnishi of Kobe and dedicated in 1977. On September 30 2005, the junction of 46 and 41 was dedicated as James Dean Memorial Junction.

We stopped at Blackwell's Corner for some bark fudge. Nice little store.

Tomorrow we depart for Travis AFB until the 3rd. Our 5th visit.
Posted by Amy at 1:07 PM