When we left this morning our intent was to visit Pipe Spring near Fredonia AZ and then go to the Coral Pink Sand Dunes SP near Kanab,UT. However, when we left Pipe Spring NP decided since we were so close 100 miles from the Grand Canyon North Rim to tour that instead. Our trip today took us 300 miles rt and 12 hours, but well worth the adventure. I will write a separate blog on the North Rim.

After visiting the Museum, we did a walking tour of the grounds and later the tour of the Winsor Castle or main house.


Pipe Spring lies on the Arizona Strip between the Grand Canyon and Vermillion Cliffs in a vast desert containing permeable sandstone aquifers that hold water from rain and snow. The aquifers have drawn various peoples from hunter-gathers ,traders,Native Americans,Spanish Missionaries, explorers and Mormons bringing conflict over land and water.

The Paiutes adapted to the harsh conditions living in natural shelters, hunting and gathering and raising maize and beans. They wove baskets for food preparation, water jugs, hats and harvesting. Unfortunately European diseases and slaving raids reduced the Kaibab Paiute population to 1200 in the 1860's.

Mormon ranchers began settling near the water sources on the Arizona Strip in the 1860's. in 1863 title was secured by James Whitmore to 160 acres around Pipe Spring. In 1864 Navajo began raiding Mormon livestock and 1866 Whitmore and his herdsmen were slained trying to recover their stolen cattle.

Pipe Spring became a vision for Brigham Young and brought the claim from Whitmore's widow appointing Anson Winsor first ranch manager. In 1870 they started the building of what is now known as Winsor Castle which covered the main spring. The outpost also had several stone block buildings known as cabins and established a telegraph line. The fort also served as polygamous underground where the men sent their wives to avoid detection by federal marshals.


In 1895 the Mormon church sold the property. The ranch remained open to travelers, cowboys, traders and salesmen as a  place of refuge when traveling. In 1923, President Harding proclaimed it a National Monument. The water use was divided among the National Park Service,the tribe and private cattlemen.

The park also has an RV park operated by the tribe. If you go, please take the 1 hour tour of the Winsor Castle and do the self walking tour of the grounds. 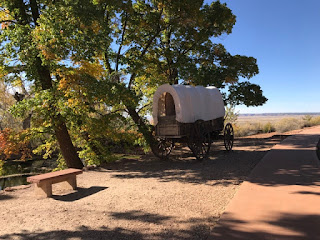