West of Brigham City is the Golden Spike NHS and a short drive up IH 15 and west on Hwy 83.

The building of the railroad linking East to West brought conflict with the Native Americans as the rails passed through their lands. Millions of buffalo were slaughtered and left to waste. They tried to fight for their land, but more and more troops were brought in and they could no longer defend their land.

Central Pacific's Jupiter was built in 1868 and later sold in 1893 to the Gila Valley Globe and Northern Railroad in Arizona after undergoing some changes including conversion to coal burning from steam. The Globe sold her to scrappers for $1,000.The same fate met Union Pacific's #119 in early 1900's also for $1,000.

Thanks to O'Connor Engineering Laboratories in Costa Mesa California, the two engines were brought back to life involving four years of love and labor. It took 4 trucks to bring them 800 miles to Promontory Summit where they were christened with water from the Atlantic and Pacific Oceans and commissioned into service 10 May 1979 on the 110th anniversary.


The Engines are brought out in the summer on designated days. This would be a sight to see.

We then took the East drive, a very narrow gravel road for scenic views and a stop at the Chinese Arch. The Arch was created by waves in the 300 million old Oquirrh formation. It is a memorial the many Chinese laborers who worked on the railroad. You can also do a West drive from the Visitor Center.


On the way back we stopped in Brigham City to see the Box Elder Tabernacle and LDS Church. 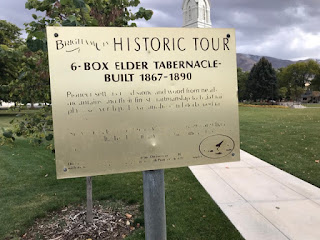