Before heading over to the coast, we met Janet at Bush Park for a nice walk. When we lived in Salem, Janet and I and sometimes John walked regularly in Bush and Minto parks. She was my motivation and inspiration. Plus we had some good conversations. Sure miss those walks now.

On the way to Cape Meares, we stopped for a picnic at Anderson's Viewpoint. 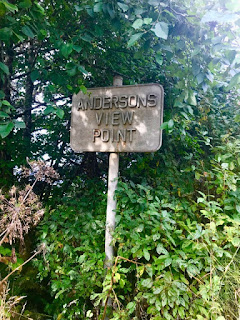 We stopped at Cape Meares SP for view of Lighthouse.


The purpose for going over to Cape Meares and Ecola SP was to document 2 WW II Radar sites. I stayed in car while John walked up to the Cape Meares site. Cape Meares site was established in 1943-1944 to provide early warning of enemy aircraft approaching the Oregon Coast.It was part of a chain of 65 radar stations along the West Coast of the USA and Canada. Concrete remains still exist.

Our next and final stop was Ecola SP and the site of the Tillamook Head Radar Site in operation from 1943-1944 and 1948-1950 for the same purpose of early enemy aircraft warning. It is now part of the Ecola SP. The underground operations building entrances are blocked by heavy steel doors. Above ground, the air intake and exhaust vents are visible. 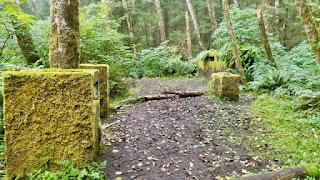 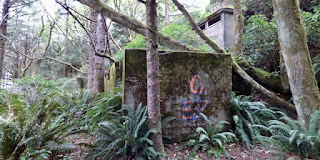 The weather was not so good, foggy and damp. Parking for the trails to the site are from the Indian Point parking area.

The Clatsop Loop Trail ascends to 800 ft and is 2.5 miles rt. We opted for the wider trail up and the narrow trail back. So glad we did it this way as the trail back was precarious, rocky and many tree roots. On the descent, found a nice walking stick which made it much safer for me. Wish I had had it on the ascent. Had to stop several times along the way. Can't believe we did not bring water. When we finally got to top at Hiker's Camp, decided this was best stress test for me. Only reason I decided to do this was I didn't want John to go it alone. The things we do for love. Even though there was a cougar warning sign, did not spot any wildlife. Would liked to have seen  some deer. From Hiker's Camp the trail continues to the Radar Site and Tillamook Lighthouse,but it was too foggy to get photo of the Lighthouse and Ocean.


This trail is a segment of the Lewis and Clark exploration party in 1806 searching for a beached whale. Hiker's Camp provides several shelters for hikers to camp overnight each sleeping four on bunk platforms.

It was a long day and got back to park at 800PM. Tomorrow we are just going to relax and catch up.