Today a shorter drive via Hwy 101 East to Windsor with stops at Grand Pre' and Fort Edward.

A stop on the way to Grand Pre' at Planter's Barracks which is now a B&B. After the expulsion of the Acadians in 1755, the fertile lands lay vacant and Nova Scotia extended an invitation to New England settlers known as Planter's to occupy the land. 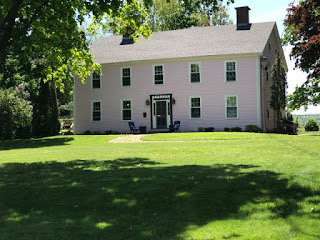 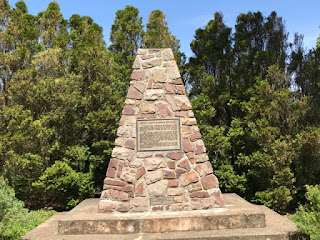 Today it is one of the most fruitful areas of Nova Scotia with many decendants still occupying the area.

Grand Pre' is a Historic Site depicting the history of Acadians who settled here 1682-1755 and their treatment by the British. Over 10,000 were dispersed in 8 years to American colonies, England and France. Many returned after the Seven Years War and built a vibrant community. Many villages were burned. The expulsion involved Acadians from Cape Breton and PEI as well. Many died from drowning,starvation, imprisonment and exposure.


John Herbin in 1907 whose mother was Arcadian purchased the land thought to be site of Saint-Charles church. On this site he built a stone cross to mark the cemetery using stones of what he believed to be from the destroyed Arcadian foundations. 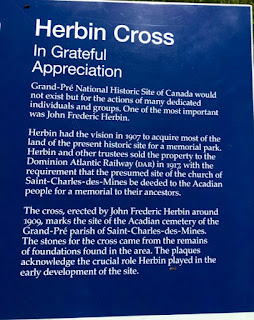 In 1917 he sold the property to the Dominion Atlantic Railway on the condition that the Acadians be involved in its preservation. Beautiful gardens were planted and they deeded a piece of land on which the Memorial Church was erected.The church was completed in 1930. It is a memorial to the men and boys who were read the Deportation Order on 5 Sept 1755.

Located in the park is a bust of Longfellow who penned the poem "Evangeline", a tale of deportation,loss and devotion. I purchased a copy in the museum store. Even though it is a work of fiction, the deportation is factual. It involves a heroine and her quest to find her husband after they were separated on their wedding day. Eventually they were reunited in later years as he lay dying. This Longfellow's first epic poem published in 1847.

Below are photos of signages about the Acadians and the Deportation: 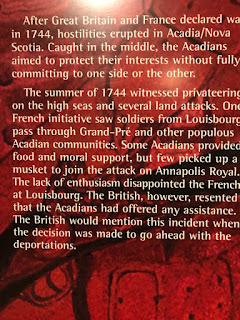 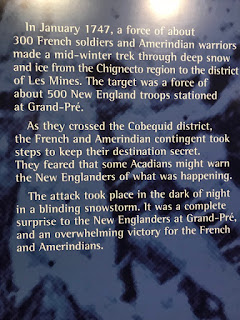 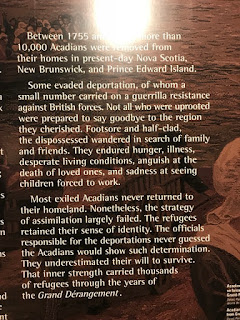 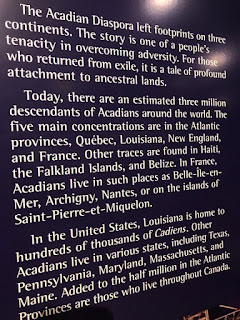 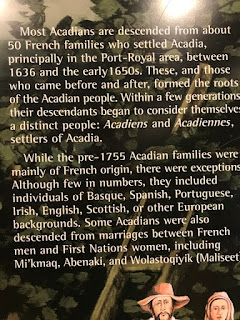 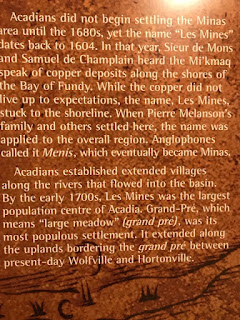 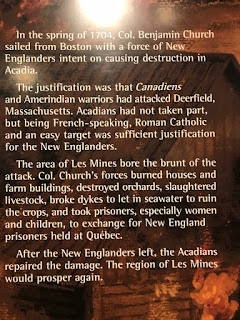 Our last stop was Fort Edward in Windsor built in 1750 to forestall attacks on Halifax by Acadians and Indians. In 1755 1,000 Acadians were deported from here. During the American Revolution and War of 1812,the fort was again used to protect Windsor and the road to Halifax. The Garrison remained until 1850. Today only a blockhouse and earthworks remain.

We stopped at Old Towne Pub for a bite to eat.

Rain in the forecast for tomorrow.