Our drive today took us west on Hwy 101 passing through the towns of Yarmouth, Barrington,Port La Tour and up Hwy 8 to Kejimkujik NHS returning back to Annapolis Royal in time for dinner at Bistro East. Our intent was to only go as far as Barrington, but since we had not traveled up the South Shore, decided to continue and do a circle back to campground. In total around 250 miles.

Since we are taking the CAT from Yarmouth to Portland ME on the 17th of August, we just made a brief stop at Tim Horton's for coffee and tea and donut. Yarmouth is located on the Bay of Fundy and in the heart of the world's largest lobster fishing grounds. The town was originally inhabited by the Mi'kmaq and sits at the southwest tip of Nova Scotia.It was visited by Champlain in 1604 and the French Acadians were the first European settlers.The town was founded in 1761 when families from Sandwich MA arrived. In 1767 after the Seven Years War, Acadians who had been exiled returned here. Yarmouth was a major shipbuilding area in the 19th century. 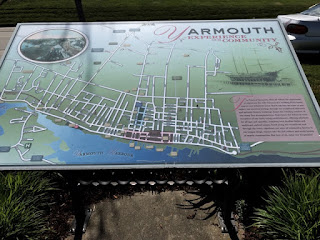 Our next stop was Barrington known as the Lobster Capital of Canada with over 23,000 tons landed each year. It is home to the only government recognized UFO sighting in 1967. The Museum located in Shag Harbor was closed the hours we were in the area. They have 6 white sand beaches, in December they construct a giant Christmas Tree built from Lobster traps and decorated with buoys to honor local and past fishermen and those lost at sea. Sure would like to see this. The area was settled in 1760 by 80 families from Cape Cod and Nantucket.

We stopped for photos of the Old Meeting House built by pioneers in 1765, the Woolen Mill, an interesting home, Seal Island Lighthouse Museum. 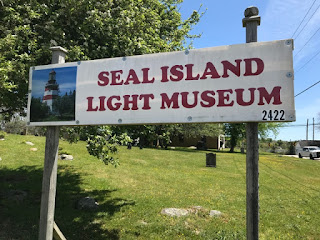 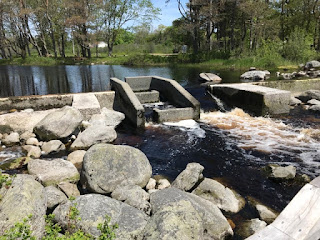 Continuing on to Port La Tour we stopped at site of Fort St Louis. There are no visible remains only a Cairn with a plaque and small cannon. This was the only remaining foothold of France in Acadia constructed during the 1620's on Fort Point overlooking a small bay on the Atlantic coast. 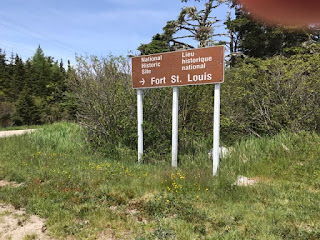 Our final stop of the day was Kejimkujik NHS. As it was getting late we did a quick drive through. The park has over 381 square kilometres of hills, waterways, wilderness, canoeing,camping, hiking trails, reptiles and amphibians. It is a haven for star gazers. The Mercey River and Kejimkujik Lake provide relaxing outing for canoes ,kayaks and fishing.Black bears, coyotes and deer abound..unfortunately did not see any. 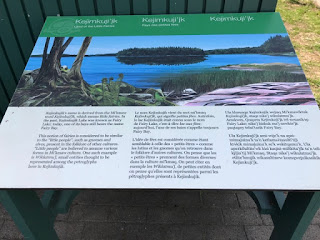 We stopped in Annapolis Royal for delicious dinner at Bistro East. I had blackened haddock with fresh steamed vegetables and John had Portebello Mushroom sandwich.For dessert we shared a raspberry cheesecake. One of the best meals in some time.