Drive to Liverpool and LaHave NS

Congratulations to granddaughter Kendyl on her HS graduation and member of the National Honor Society. Wishing all the best in your future. Continue to aspire and dream. So sorry we could be with you, but you are always in our thoughts.

Today we drove to Liverpool via Hwy 8 from Annapolis Royal and on to LeHave returning back via Hwy 10. It was such a nice drive and relaxing. Never tire of the small communities with their well maintained homes..each somewhat different..pride of ownership..beautiful gardens and flowers.

Liverpool  located on the Eastern side of Nova Scotia south of Halifax was founded in 1759 and the port of privateers and home to world class shipbuilders. We stopped at the Fort Point Lighthouse and Battery defender of town and trade from privateers and agressors. The Lighthouse welcomed safe entry into the harbor for seafarers. Shipbuilding made Liverpool a wealthy community with some of the fastest ships built here. Liverpool was the departure point for ships  laden with fish and lumber to Europe,West Indies and North America. Liverpool was the privateering capital of British NA. In 1813 a Battery and Blockhouse were built on this site to defend Liverpool from unscrupulous American Privateers. The Lighthouse is the Province's 3rd oldest surviving and is now a museum. You can walk the steep stairs to the top and blow the foghorn which I did. 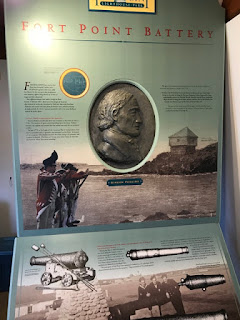 Our final stop was Fort Sainte de Grace and Lighthouse in LeHave at the mouth of the LeHave River established in 1632 as a permanent Acadia settlement. It was abandoned in 1636 for  Port Royal, destroyed by fire in 1653. Cannons, a cairn and lighthouse exist today. The Lighthouse was built in 1875 to serve as navigation for ships on Dublin Bay and the LaHave River,demolished in in 1954 and replaced by an unwatched light and is now a museum.

LeHave is located near the town of Bridgewater on Hwy 331. Champlain made landfall here in 1604 and Henry Hudson in 1609. Even tho the Mi'kmaq showed hospitality to Hudson and his crew, an unprovoked assault was staged against the Mi'kmaq and as a result a raid on the next Dutch ship was undertaken in 1611. Today the community is home to many artisans.

It was a nice driving day and upon returning to camp met a couple from Salem who are also fulltimers and an other couple from Georgia. Both couples are going to Newfoundland.