CAT from Yarmouth NS to Portland ME

Awoke early for the arrival at CAT for 830AM departure from Yarmouth NS to Portland ME. Got there at 700AM. Since we were in a motorhome, we were boarded last. Not a full ship. There are 3 cafes and ample seating. Staff is very accommodating and helpful. Had breakfast and settled in the middle area for less motion. First part of trip which is 5 1/2 hrs was motion iffy. Got a bottle of ginger ale and several packets of cracker. Only ate part of my breakfast cibatta and gave John the rest. Thanks, Carolyn, for cotton suggestion in ear..think it helped. As it goes, if you are right handed put cotton in left ear and vice versa. As the trip progressed, ride was less motion. Had homemake chicken noodle soup for lunch.

There is a nice gift shop onboard and movies are shown. Downside is no Wi-Fi. If you are towing, you must book tow as separate vehicle. The reason for this is..oneway on oneway off. This was highlight of John's day when we arrived in Portland to find unlike other ferries we have taken, you back off ..took some 3 staff to guide him and make modifications. At least it was straight backup. Wonder how this will go in Yarmouth as it involves turns. Also, when we got to campground,noticed since we were the last on, the motorhome was covered in sea salt. Still would recommend this as a way to get to Nova Scotia if you don't want to do the longer drive.

Some nice scenes arriving into Portland. 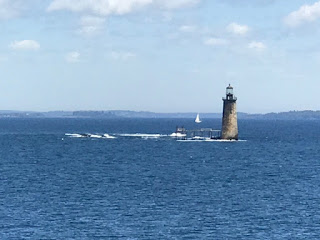 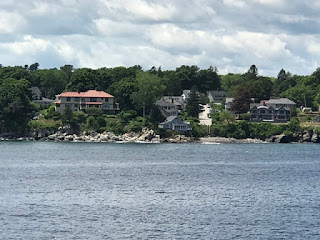 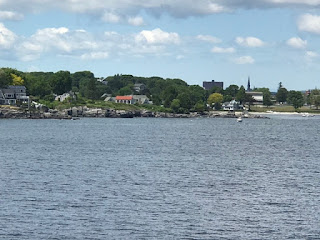 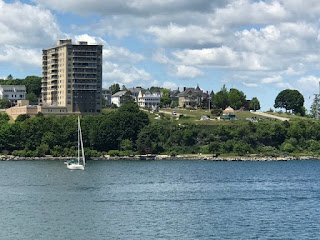 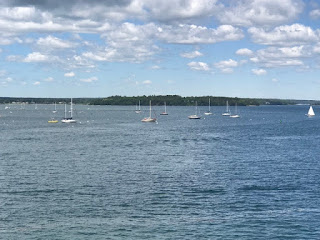 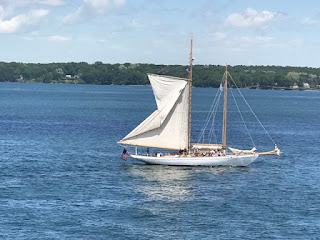 I've said it before and will say it again,if we never see MA again it will be too soon. Traffic in both directions is a stop and go nightmare. It took us over 4 hours to drive to campground which was only 160 miles.Makes no difference which route you take.

Camper's Haven in Wales, MA just south of IH90 is a very nice campground and the owners are very friendly and helpful. They let us wash down the motorhome because of the salt. Only here1 night.

Long drive tomorrow..300 miles to Sodus Point NY..we were last there in 2016. Very nice and scenic on Lake Ontario.