Our last days at West Point Round Pond Campground we were able to secure an appointment with Apple and a genius to fix my iPhoto problem. Thank goodness, Sean the genius was able to solve the issue. Must say that John is my personal support and he understands the fix which I won't go into, so when we got back he fixed the problem. Unfortunately, when the photos were brought over on the new backup to photos, no names or dates. So now that will be a project for me in the future.

Our 6 hour drive today to the JB Cape Cod took us on IH 87 to IH 84 to IH 90 to IH 495. Thank goodness for EZpass. The roads in NY are terrible..lots of ruts..bumpy,bumby..better when we got into CT and worse into MA. We are staying at the JB Cape Cod campground near Bourne and Buzzard's Bay. This is our first stay and the campground only has 5 full service sites.
There are only 3 campers here. Checkin is at the Wings Inn and this is also location of laundry. There are lots of wild turkeys on the Cape and even saw 3 deer near campground. We will be here until the 6th.

Today was errand day with a trip to Costco in Avon to order tires for the Malibu, then a stop at Major RV on Hwy 28 near the campground for parts. John is going  to replace the shower faucet and shower, some cabinet hinges, a light fixture and after 6 years of searching for a lug nut for the RV, they had the right one. This place is far better than Camping World and the staff very helpful and nice.

The reason for replacing the faucet and shower head was more needed than first thought as we discovered after removing it.Even though I clean regularly, some areas cannot be completely cleaned and there was a build up of mold and crud. Always something to repair. Thank goodness John can do most of it.

Our last visit to Cape Cod was in 2012. John wanted to revisit the North Truro AFS . It is now a part of the NPS and in need of serious repair. The area is now fenced; however, we were given access by one of the park rangers. The AFS (1951-1985) to detect approaching enemy aircraft. John has a more definitive page on his website fortwiki.com. One of the reader boards showed the Texas Tower 2 100 miles east of Cape Cod. John was stationed on this tower in the early 60's.


On way back we drove through Chatham, a very upscale community on the south end of the Cape.

Costco called today to say our tires were in. John is very happy with the tires, price and installation. Maybe we can get another 70,000 miles.

Today is get ready to go day with several projects one of which is going through the closet to put clothes aside for donation.We have accumulated too many and the closed is getting crowded.

Our next door camper neighbor recommended a great seafood place in Sandwich..Seafood Sam's so we went to dinner. Restaurant is on the Cape Cod Canal in Sandwich. A really good place for seafood. John had shrimp and scallops and I fried clam strips. 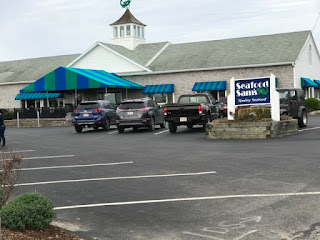 Our next stop is Fourth Cliff Hanscom Recreation Campground overlooking the Atlantic near the town of Scituate,MA. This is our 2nd stay here. We will be here a week then on to Hanscom AFB near Boston until the 27th.