Our last day at Hanscom AFB we decided to drive down to Readville, MA the site of Camp Meigs. 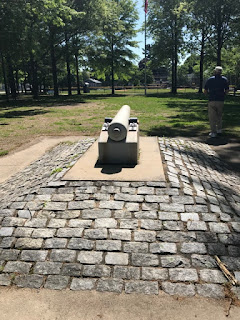 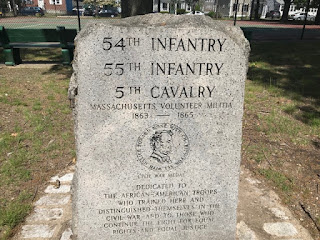 Camp Meigs was a US Civil War Union Training Camp established in 1862 as a trining camp for Massachusetts Volunteer Militia. and closed in 1865. After the Emancipation in January 1863, African American troops were admitted into the Union Army and trained here. The camp encompassed 139 acres with barracks, stables and officers' quarters. During 1864 it became the site for injured and sick of the MVM including some 71 buildings consisting of wards, quarters, kitchens,storehouses etc.


The site is now a neighborhood park with signage and monument. Homes and businesses were built on the 139 acres so no remains of original buildings. Talked with one of the residents who said that only recently were the signs added to mark the African American history in the camp.

On my New Hampshire blog, failed to mention the heart shaped rocks I found for Hope's rock garden. Everywhere I walk I always look for these rocks. Why you ask? Well, it all started on one of our early beach walks in Oregon when we found a heart shaped rock and has continued to this day. My way of always letting her know that I am thinking of her.

Tomorrow we leave for Pleasant Hill Campground in Hermon, ME near Bangor. We were last here in 2013 on our way to New Brunswick and Nova Scotia. It is a very nice campground, quiet, wooded and well maintained with a very friendly staff. We will be here for 4 nights before departing for St John New Brunswick for 2 nights before taking the ferry to Digby NS.

Weather is cloudy with some rain. We were so glad to get out of the Boston area. Traffic a nightmare no matter what time of day. Good to be in less congested area.