Today we departed for a day tour of the Outer Banks (OBX). Our drive took us via Hwy 168 thru Currituck County  to Hwy 158 and across the Currituck Sound to the Outer Banks at Kitty Hawk. Not a bad drive of 2 hours. This was my first visit after almost 77 years to visit here even though I was born and lived my summers in NC, it seems we always went to the mountains and other areas.

The Outer Banks have beautiful beaches, sand dunes, homes and businesses. I can just imagine what it is like in the summer season. 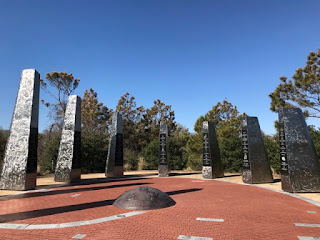 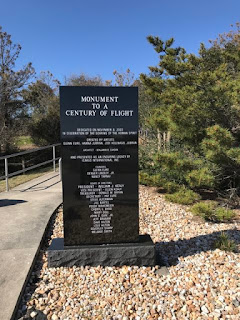 We then drove to Kill Devil Hills to visit the Wright Brothers National Memorial, site of the first powered flight on 17 December 1903. The monument sits atop Kill Devil Hill. The reconstructed Flyer by artist Stephen H Smith sits below the monument and is made of stainless steel weighing 10,000 lbs. The brothers took turns flying 4 flights that day ranging from 12 to 59 seconds and length of 120 feet to 852 feet. The last flight was caught by a gust of wind, rolled over and the Flyer was damaged beyond repair. They went back to the drawing board and built an improved flyer and refined their flying skills. 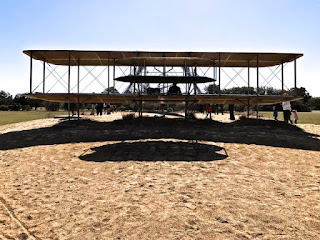 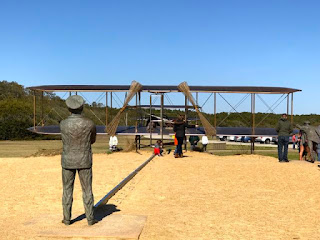 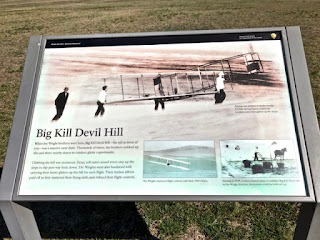 Legend has it that the name Kill Devil Hills originated years ago when sailing ships carrying rum to the north would wreck along the Outer Banks. When the spoils were found by local residents said the rum was strong enough to kill the devil.

Our next stop was Fort Raleigh on Roanoke Island and the Lost Colony. Fort Raleigh was the site of the first English Colony in the New World in 1585 and 1587. It is here that 116 settlers disappeared and have never been found. Roanoke Island has been home to Algonquians,European settlers, Civil War soldiers and African Americans. During the Civil War, Union troops occupied the Island. In 1902, Reginald Fessenden transmitted the human voice using wireless technology from here. 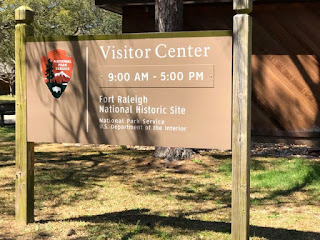 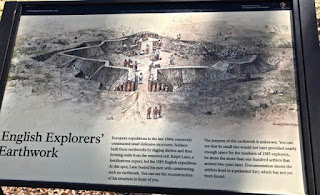 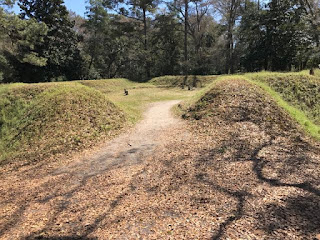 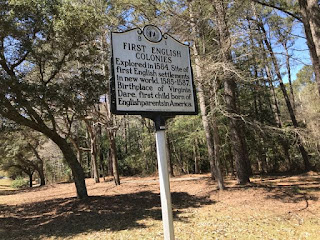 On the reconnaissance exploration in 1584 to settle the coast of North America and to counter Spanish domination, two vessels arrived off the coast. Captains Amadas and Barlowe established relations with the Algonquians who made them feel at home and taught them about tribes in the area. When the English departed, they took with them two Algonquians, Manteo and Wanchese.

In 1585 Raleigh sent 7 ships with some 600 people to Roanoke Island which he named Virginia. The soldiers built an earthen fort to establish a base to raid Spanish ships. Grenville then departed for England leaving some 107 soldiers and colonists behind.Relations with the Algonquians began to sour as the colonists became dependent on food from the Indians and they in turn began to die from European diseases. Lane who was in command killed Chief Wingina. Grenville failed to return with supplies and when a raiding fleet stopped nearby, the colonists accepted an offer to return home.

In 1587 the next voyage brought women and children led by John White with 117 colonists looking for the 15 men left by Grenville. The objective was to go to Chesapeake Bay after searching for the 15 men left behind, but White's pilot refused to  to travel farther and they stayed behind to repair the fort left by the 1585 colonists The situation with the Indians was deteriorating and White left to return to England for supplies leaving the colonists behind. He did not return until 1590 and found no one and it remains a mystery to this day. The colonists said that if they left they would carve on trees their destination. On trees were carved CROATOAN AND CRO which is now Hatteras Island. A hurricane forced the ships to return to England before a search could be made.

Much speculation has been talked and talked as to what really happened..were they slain by the tribe,did they starve, did they make it to Hatteras or did the Spanish slay them. We may never know. 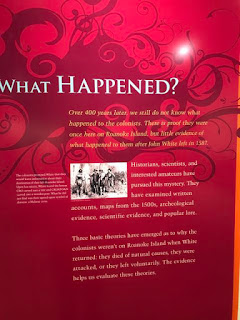 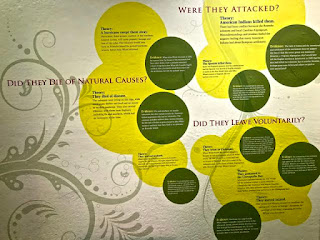 The Freedman's Colony was established here during the Civil War and by 1865 almost 3500 people lived here in log dwellings, a hospital, church, school and sawmill they had built. The colony was decommissioned in 1867. 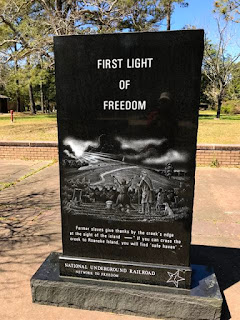 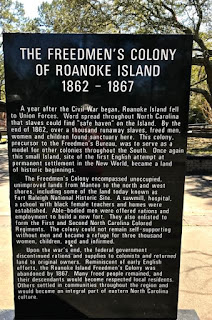 Roanoke Island is surrounded by Albemarle Sound on the north, Croatan Sound on the west, Pamlico Sound on the south and Roanoke Sound to the east. Fort Raleigh sits on the north end of the island. Manteo pronounced mano is the largest town. It has lots of quaint shops, restaurants and the Festival Park.

We then drove Hwy 12 to the end on Hatteras Island around 60 miles from Nags Head stopping at the Cape Hatteras Lighthouse. The lighthouse was built in 1870 at 208 ft and the world's second tallest brick lighthouse. 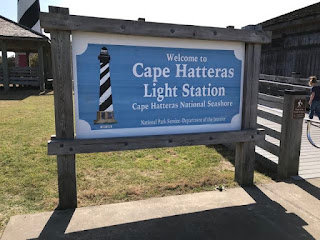 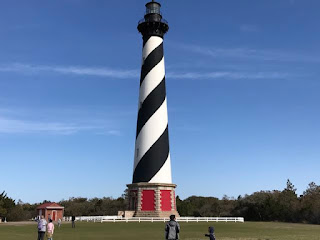 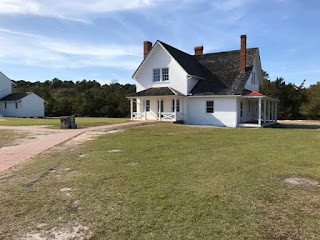 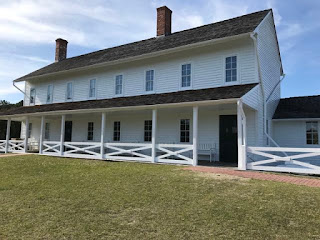 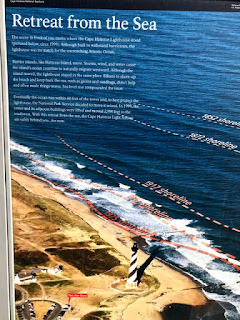 The purpose of driving down to the Hatteras Ferry to Ocrakoke was so John could get some photos of fort signs for his website. Our intent was not  to drive that far since it would make for a long day, but we knew we would probably not return.The ferry from Hatteras to Ocrakoke runs daily, is a car ferry and is free. There is a lighthouse on the island.Also by the ferry dock is Graveyard of the Atlantic Museum. Over 1500 ships have wrecked here due to shallow shoals, storms and war.

We stopped for dinner in Kitty Hawk and got back around 900PM. A very long day. In retrospect we should have spent the night as there was so much we were unable to see. I had wanted to drive the north part from Kitty Hawk to Corolla.

Even tho it was a long day, it was a good day. On the way back across the bridge to Nags Head at Oregon Bay, snapped some pictures of the new bridge construction. Numerous cranes in the air..a sight to see. Looks as if this will be a long project. 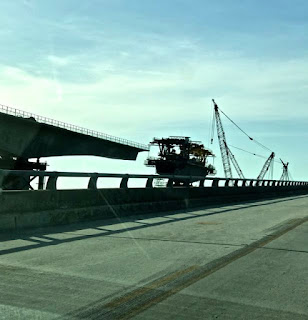 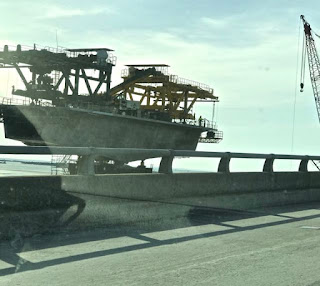 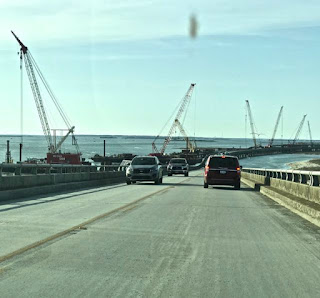