Return to Outer Banks and Tour of Corolla

Today we decided to return to the Outer Banks as John found a few Civil War sites he missed last week and I wanted to drive up the North end of the Island to Corolla.

On the way to Corolla you pass a small community known as Duck. As of the 2010 census the population year round was 369 with a summer increase to over 20,000. There are no hotels, campgrounds or resorts ..only home rentals and a small inn.
The small town offers, restaurants, shopping, activities, galleries,parks and a boardwalk on the sound side.

Corolla lies between Currituck Sound and the Atlantic Ocean and is the northern most town in the Outer Banks. The year round population is 500 and like Duck and other towns on the Outer Banks, swells to thousands during the summer.  It is home to the Currituck Lighthouse, Historic Corolla Park, Whalehead Club and home to around 119 feral Banker horses. Over 50,000 people each week come to see these horses in the summer. Unfortunately we did not have an ATV, 4-wheel and too late in the day for a tour.

Currituck Light Station first shined its beacon on 1 December 1875 filling the dark space between Cape Henry to the north and Bodie Island to the south.To distinguish it from other lighthouses, its exterior was left unpainted. It is without a doubt the most magnificient lighthose I have seen. Three keepers and their families shared the keeper's house. Two keepers remained until 1937 when it was automated. Over the years the home stood exposed to the elements, was vandalized and invaded by vines.Today, the grounds and home have been completely brought back to restoration and is leased as a private residence for the year round keepers of the property. 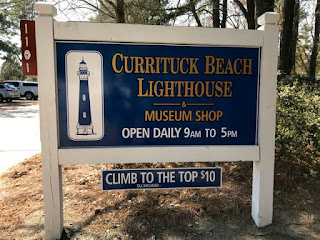 We then took a tour of Whalehead built by Edward Knight, Jr and his wife, Marie louise in 1925 in the Art Nouveau style.


The Knight's spent their winters here hunting and entertaining. It was restored in 1992 and is open year round for tours. Photos are not allowed inside..a disappointment. It is said the 21,000 mansion is haunted. The mansion consists of five floors, 14 servants, many bedrooms and bathrooms (I lost count), parlor, dining room, massive kitchen,office, outside structures , boathouse, bridges and canals. The land purchase consisted of over 4 miles..ocean to sound. They named their estate Corolla Island and is now referred to as Whalehead.. The couple only live here 10 years after their passing in 1936. Since then the home has had many different owners and in the 1990's it was abandoned. Today it has been restored and refurnished to the period of the 20' and 30's.

Having toured the Outer Banks south to north, must say we prefer the northern part as it seems, in spite of all the homes, to be less congested and more scenic. Less commercial and quieter.