Today we drove the Chesapeake Bay Tunnels and Bridge over to the southern part of the VA Eastern Shore to visit Fort Custis site and Winslow Battery located on the grounds of the Wildlife Center. Also, we drove to Kiptopeke SP to see the WWII Naval Concrete Ships in the Bay. 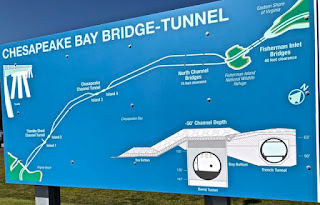 We last visited Fort Custis and Winslow Battery-1943-1948 (122) in July of 2010. Since then a 16" gun has been added and restored and more clearing has taken place for easier access. The area is located on the grounds of the  National Wildlife Refuge just past the Eastern Shore Visitor Center on Hwy 13. The Battery had two gun emplacements 500 ft apart connected by an earth covered reinforced concrete magazine and support structure.


Fisherman's Island is inaccessible. It was here in the 1800's that a Quarantine facility was set up for immigrants coming to Baltimore and Newport News, VA. During WWI and WWII the island served as a coastal defense system. No remains today.

During WWII due to shortage of steel and the need for ships to carry cargo and supplies to the military essential for fighting the war effort, ships with concrete hulls were built measuring 120 yards in length and weighing over 5,000 tons. Several of the ships were sunk off Normandy to create a breakwater to protect the guys landing at D-Day. After the war the ships were put in mothballs. 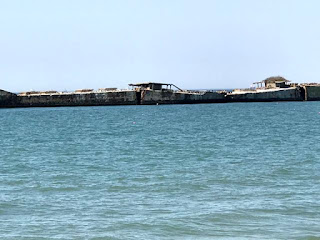 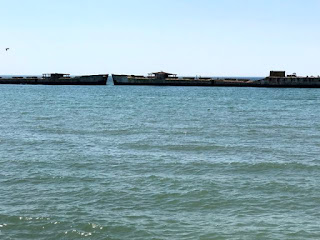 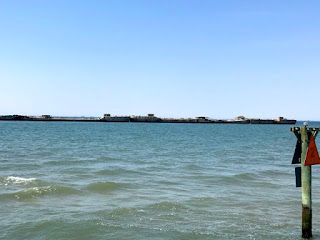 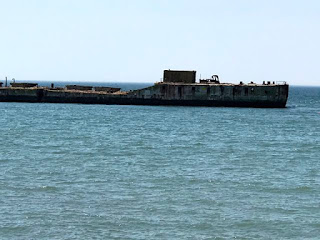 The Virginia Ferry Corporation in need of a jetty to protect the new ferry terminal linking Cape Charles with Hampton Roads,  were granted permission to use 9 of the ships. Some of the ships were in Norfolk and some in Beaumont, TX. They were half sunk in an arc with an opening in the middle for ships to pass. The ferry was closed in 1964 when the bay bridge and tunnels were opened. My photos do not do justice as one would have to get close on a boat. There are much clearer and dramatic photos online.

We will travel the Eastern Shore Tuesday on our way to our next destination Delaware National Guard Campground in Bethany Beach. While here I want to visit the Chincoteague and Assateague area to view the wild horses and other sites.

Pollen is terrible. Will have to do a good cleaning before we depart.

We finally bought an EZPass as we discovered it is good for states up the Eastern coast and other states. Makes it so much easier rather than being billed by plate. Should have gotten it when we arrived.

Weather is nice this week with sunshine and higher temps.