On to Plymouth and Bath

Our last two stops today were Plymouth and Bath NC.

Plymouth located on Hwy 99/45 is the largest town in Washington County with around 4,000 people located on the Roanoke River. Our visit here was to track down some Civil War markers and sites. The town was laid out in 1787 as a port of entry with shipments going to the north as far as Boston as well as West Indies. The town prospered until the Civil War. It was in great demand by both sides. It was here that the Confederate ironclad CSS Albemarle was sunk by the Union in 1864.

In 1898 a fire destroyed  most of the commercial district. There is a museum on Water St named Port O'Plymouth.This is one of many sites on the historic Albemarle Tour.


Fort Compher, a Union fort was a key position for the US forces in Plymouth. In April 1864 Confederates attacked the fort and the Union surrendered Plymouth.


We then drove to Bath on the Pamlico River on Hwy 92. Bath is North Carolina's first town settled in the 1690's by Europeans and founded in 1705. It became NC's first port. Political rivalries, Indian Wars and piracy were common in its development. In 1746 it became the colony's capital in 1746.It was also a haunt for Edward Teach aka Blackbeard who was killed in 1718 on Ocracoke in a Naval Battle by the British Navy. 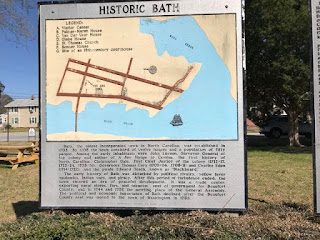 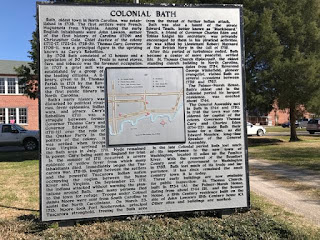 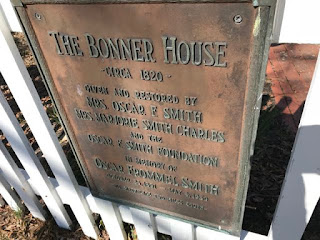 Bath remains a small village.
Posted by Amy at 2:50 PM