It started out a nice day, but soon turned rainy and windy on our way to Kinston, NC to view some Civil War markers and sites pertaining to the Battle of Kinston. We stopped at the Visitor Center, one of the nicest with various state maps and travel booklets.

We drove to several sites and John even in the rain hiked to one of the earthworks and along the driving tour managed to get several signs about the battle. Our last stop before leaving was the Battle of Kinston battlefield and Starr Battery. 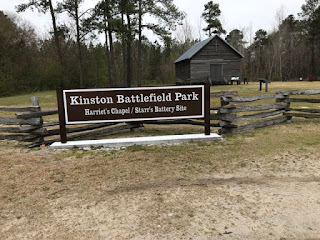 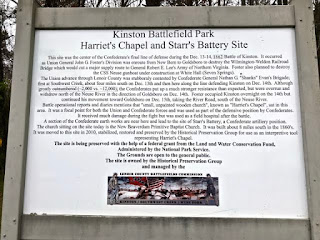 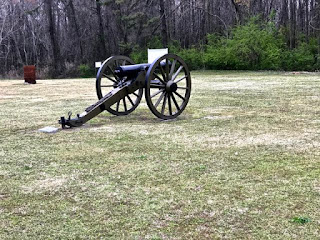 The battle took place 13-14 December 1862. Kinston was the Confederate first line of defense between New Bern and Goldsboro. Earthworks were built on Southwest Creek and Neuse River. The entire NC coast except Wilmington was in Union control. In taking Kinston, General Foster planned to take Kinston, destroy the gunboat at White Hall, wreck the railroad bridge at Goldsboro and capture Wilmington.

After two days of intense fighting, Foster's objectives were achieved except he did not capture Wilmington due to circumstances following the Confederate victory at Fredericksburg, VA, he was forced to abandon his plan and retreat back to New Bern.

On the way home we took a detour to Ayden to have dinner at the Skylight Inn Barbecue that was featured on one of the Travel Channels food programs. We timed it just right, as soon there was a line out the door. They only take cash and you order at the counter. We had a chopped barbeque sandwich with slaw and hot sauce and shared an order of baked beans..the best we have tasted. Wish I had the recipe. They have been in business since 1947. Only disappointment, they did not have hush puppies.