Forts Near Beaufort and Parris Island Marine Base

Taking advantage of the good weather we decided to drive down toward Beaufort to explore more forts that we missed on previous trips especially the ones on Parris Island Marine Base.

Our first stop was on the grounds of the US Naval Hospital at the Fort Frederick Heritage Preserve. If you don't have a military ID card, access is by private tour. Fort Frederick was a 125 foot by 75 foot tabby fort completed in 1734. It contained a magazine and barracks garrisoned by the British 1734-1744. Later is was garrisoned by the SC militia. Some ruins remain. 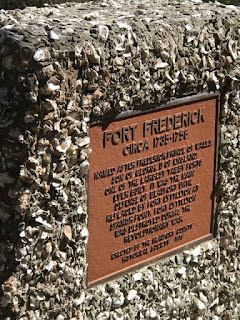 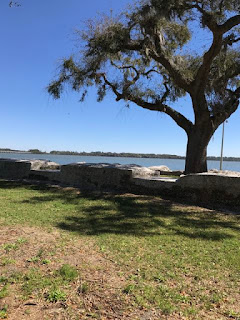 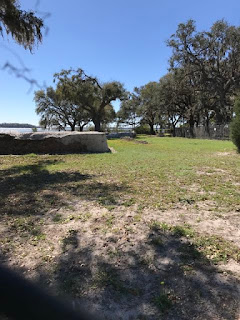 Also on the grounds is a plaque for Camp Saxton, a Union camp mostly for Negro Troops and the Emancipation Oak under which the Emancipation was read on 01 Jan 1863 on a plantation owned by Joyner Smith. After the reading, the 1st SC Colored volunteers were taken into Federal service. 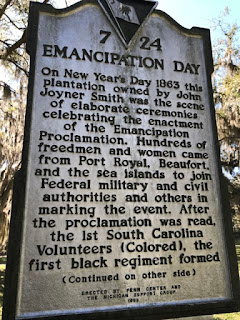 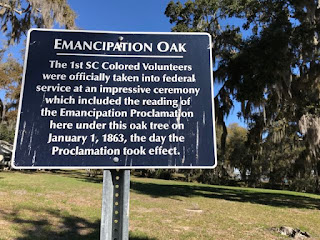 Fort Beauregard was our next stop, a private island known as St Philips formerly owned by Ted Turner who recently sold it to the state of SC. The island is only accessible by boat and no remains of the fort which once had a CSA 13 gun earthwork and captured by the Union in 1861.

On our way to Parris Island, we stopped at Fort Fremont,our 3rd visit since 2010 to see if any changes had taken place. The fort is located on the southwest tip of ST Helena's Island originally  established as an adjunct Naval Hospital in 1875. The Army took control in 1898. There are two Endicott batteries, Battery Jesup (1899-1914) and Battery Fornance (1899-1913). 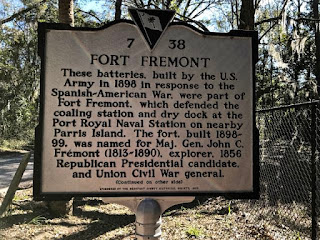 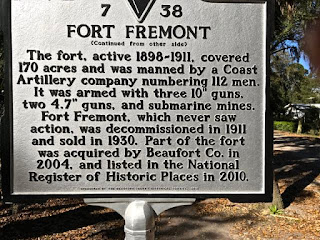 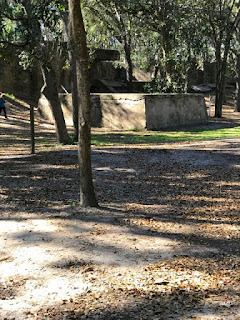 The property is now a public park. The former hospital still exists and is a private home. The fort protected the Port Royal Naval Station. The original site was sold in 1930.

Our final stop of the day in the area was Parris Island Marine Corps Recruit Depot. We first stopped at the  Museum which features a complete history with displays of the Marines. We then drove to the Santa Elena Forts (1566-1587) adjacent to the golf course. 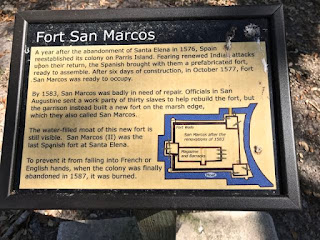 The settlement of Santa Elena (1566-1587) was built over the ruins of the French Charlesfort settlement(1562-1563). Charles Fort was built by 150 Huguenots under Jean Ribault. When Ribault returned to France for supplies, the 26 men left, mutinied and abandoned the site.

The first first fort built by the Spanish was San Salvadore in 1566. Fort San Felipe (1566-1570) was built over the actual ruins of Charles Fort. The settlement was destroyed by the Native Americans in 1576 and later rebuilt a new fort, San Marcos (1577-1583) and destroyed it when the Spanish abandoned the area in 1587 and returned to Florida.

On the way home we stopped at RB's restaurant for some seafood. It is located in Mt Pleasant and we ate here in 2012.It overlooks the waterway and couldn't resist getting photo of 3 beautiful dogs on the boat. John has shrimp and flounder and I Salmon Oscar. Very good. 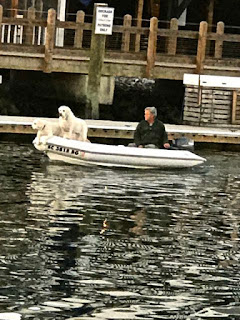 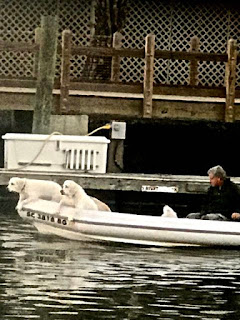