Our last outing before departing Charleston on the 15th was to visit Battery White located on the grounds of the Belle Isle Yacht Club and housing development on Winyah Bay just south of Georgetown, SC. When you arrive at the gate call the number on the keypad and tell them you are here to tour the battery and they will open gate.

The battery has been well maintained and preserved with post markers on the trail depicting the cannon placements, magazines.ramparts etc.

The Battery was built during the Civil War to protect the Winyah entrance  to Georgetown. It contained 17 earthen breastworks and guns. There are still two 10 inch Columbiad cannons in place with two others at the waterfront in Georgetown. 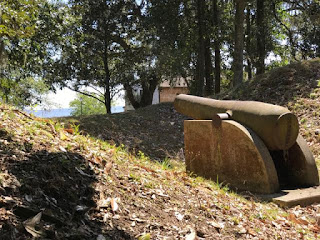 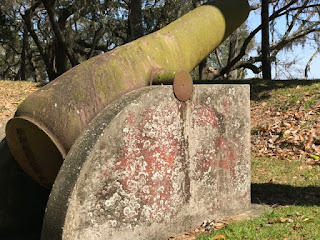 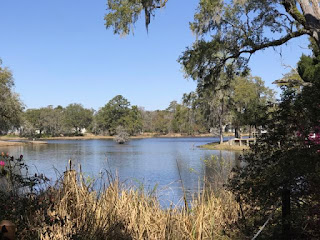 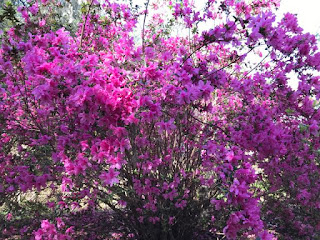 On General Sherman's March to the Sea, the Confederates withdrew from the Battery in order to help intercept the Union Army. As a result when Union Admiral Dahlgren's ships arrived in the bay, the Battery was unmanned. Troops from the "Mingoe" landed to find the guns spiked and powder removed.

On 1 March 1865 Dahlgren took command of Georgetown and on this day he lost his flagship "The Harvest Moon" having been sunk by a homemade bom made by Confederate hero Captain Doggette. This was the only Union ship sunk in Georgetown waters. It is said that at low tide you can see portions of the ship from Belle Isle.

Tomorrow is get ready to go and for a $10 fee, John can wash the Motorhome which is covered with pine pollen.

We have enjoyed our stay at JB Charleston. The campground is well maintained and a good location for touring.