We departed today for Camp LeJeune Marine Base Onslow Beach Campground an hour from Wilmington, NC. We will be here until the 22nd when we travel to Cherry Point Marine Base and Pelican Point Campground until the 31st. 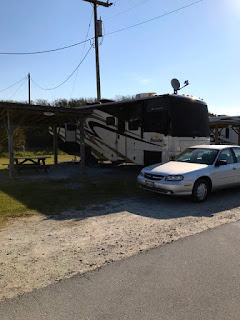 This is our second time at LeJeune since 2012. The campground is small and a few steps from the beach. Unfortunately weather is not in our favor with rain, wind and cooler weather.There were several things we wanted to do, but our only outing was to Fort Johnston in Southport.

There is a sign at the office that reads:

Welcome Spring
"you can shake the sand from your shoes, but it will never leave your soul". Very true.

23 March
Fort Johnston was originally established as a colonial fort in 1748 and destroyed during the Revolutionary War. It was rebuilt as a Second System coastal defense fort for the war of 1812. The fort was seized by the Confederates at the beginning of the Civil War and later taker by the Union forces in 1865. It was abandoned in 1881, but used by federal agencies until 2005.

The remaining building known as the Garrison House now houses the Visitor Center and Museum. The hospital building is now a private home.


Southport is a charming coastal village with many historic homes in the traditional southern atmosphere. It is a short ferry ride from Fort Fisher and located at the mouth of the Cape Fear River where it meets up with the Atlantic Ocean. The town was established in 1792. The 4th of July festival attracts 40,000 to 50,000 annually. Several movies and TV shows have been filmed here. The original name was Smithville. I wish we could have had more time to explore, but weather was not good and we were having problems with the car leaking coolant.

Since we are having problems with the car, we stayed in the campground over the weekend which was OK since it rained most of the time. Have not had many walks on the beach. I started putting the final plans on our trip to Nova Scotia and Newfoundland. Instead of taking the ferry from Portland,ME to Yarmouth NS we decided to drive to St John NB and take the ferry over to Digby NS on the 31st of May with a return ferry from Yarmouth to Portland on the 17th of August.

On the 20th of June we will take the ferry from North Sydney to Argentia NL with a return from Port Aux Basques back to North Sydney NS.

Reference the car repair, John decided to take it to Jeff Gordon Chevrolet in Wilmington. Can't say enough good things about the operation. They managed to fit us in on Monday the 19th and give us a loaner. Our first estimate came in high and after getting a second tech to evaluate the situation, we had a total cost of $1100 to replace the gaskets,seals, oil change and filter. We feel confident in their professional work and would not hesitate to recommend them if in the Wilmington area. Everyone was helpful, courteous and friendly. Maybe we can get another 200,000 miles..hee hee.

Still raining so went to the commissary and exchange.