A Day of Forting on Hilton Head Island

Our touring today took us to Hilton Head Island to tour several forts located on Port Royal, Hilton Head & Palmetto Plantations. We booked a tour thru Coastal Discovery Museum for the ones on Port Royal Plantation as this is only access.The tour is $12/ea and departs from the Port Royal Clubhouse on Wednesday at 1000AM. Forts Walker/Welles, Sherman and Battery Dynamite were included in the tour.

On 7 November 1861 a fleet of 71 ships with 155 guns under the command of Samuel DuPont, plus 12,000 troops and a labor force of 1,000 under the command of General Thomas Sherman attacked Fort Walker. It was the Union's purpose to blockade the Confederate ports and to serve as a training and supply base. In March 1863 Hilton Head was designated the Headquarters of the South for the US Army and called Port Royal. Walker was renamed Welles after the capture in 1861. 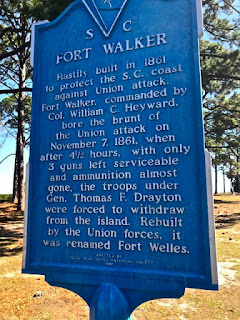 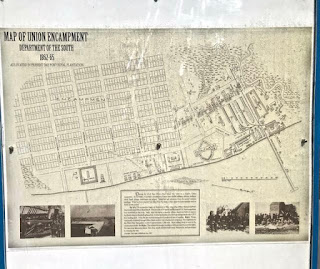 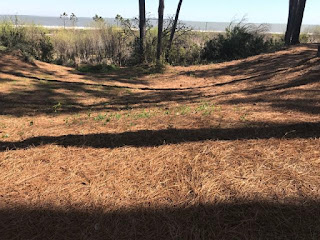 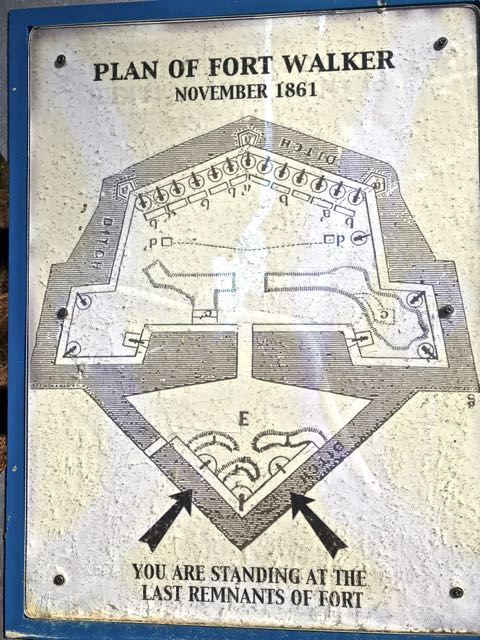 The battle of Port Royal was one of the earliest amphibious battles of the Civil War. The sound was guarded by Fort Walker to the south and Fort Beauregard on Philips Island to the north. 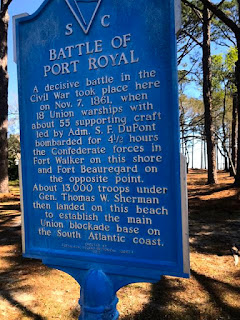 Our next stop on the tour was Battery Dynamite located 200 yards from site of Fort Walker/Welles (1890-1910). It is now in ruins.The Battery was deactivated in 1902 and the guns and carriages salvaged in 1917. The gun was powered by compressed air. The explosive used was dynamite. 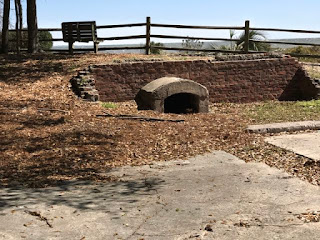 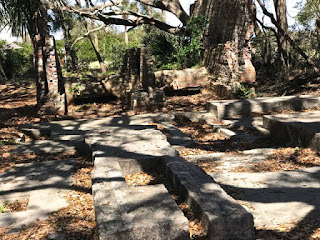 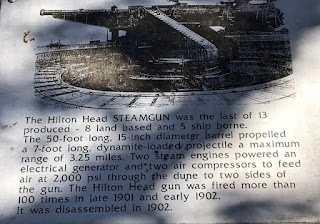 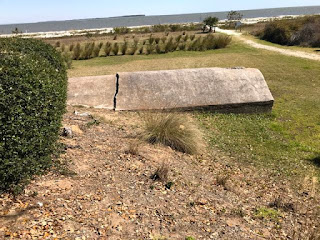 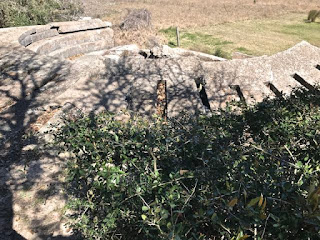 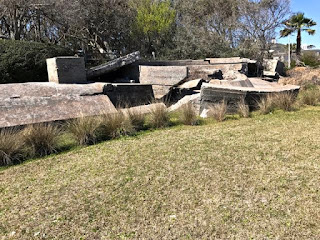 Our last stop on the tour was Fort Sherman (1862-1866), a 14 acre landward defense earthwork abandoned in 1868. It became the inclusive name for all the Union earthwork defenses, barracks,quarters etc within the 800 acre military reservation of Hilton Head Island. 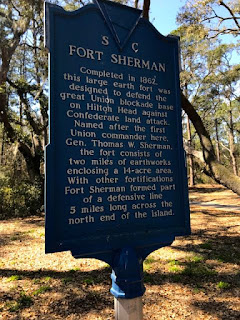 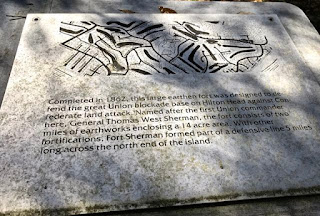 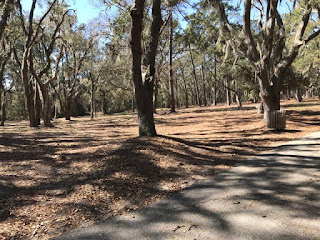 Leaving the tour, we went to Fort Howell (1864-1865) which is now located in a public park on Beach City Road. This is an earthenware fort built by the Union Army. 500 members of the 32nd US Colored Infantry were assigned to the task of the building. The fort was constructed in the middle of a large cotton field to protect Mitchelville, the first freedmen's village of the South. The fort was designed for 27 guns, 11 field pieces and 16 siege guns.Walking through the park are cutouts and signs of the troops stationed here. 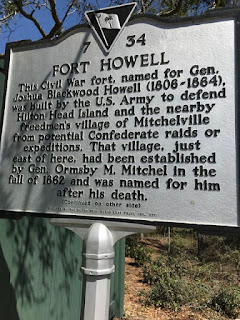 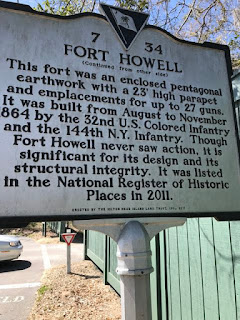 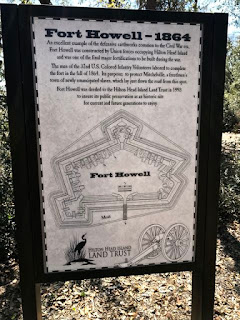 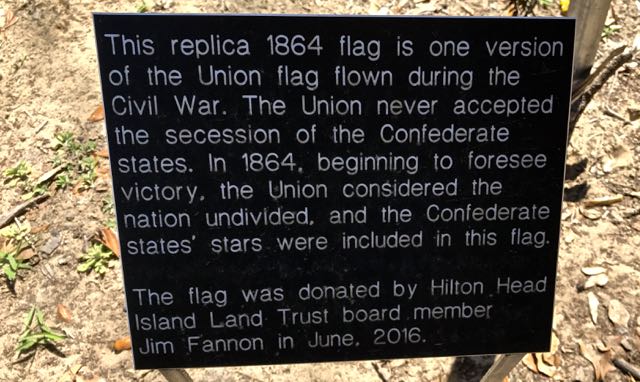 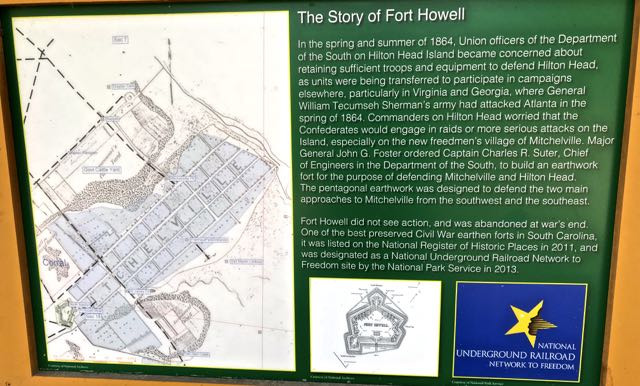 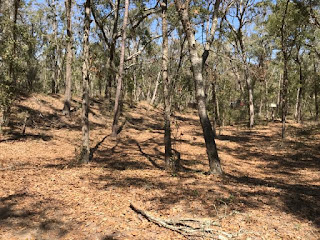 Also on the walk is a sign about Harriett Tubman who was a slave, scout, spy, nurse, abolitionist and conductor of the Underground railroad. She successfully guided the raid on the Combahee River in 1863 disrupting the supply lines of the Confederates and freeing 700 slaves. 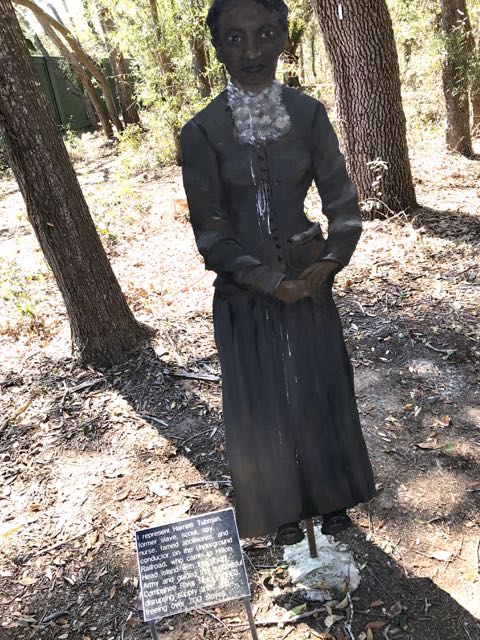 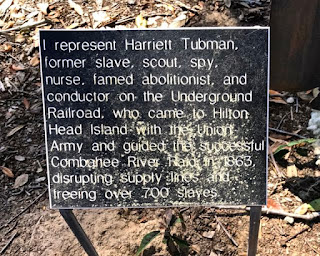 We then went to Fort Mitchel located on the Hilton Head Plantation. At the gate just tell them you want to visit site of the Fort and they will give you a pass. We had wanted to have lunch at the Fort Pub, but they were closed until 4PM. The fort is next to the pub. Fort Mitchel (1862-1865) was a Union earthwork battery on Skull Creek. In order to build the fort, all trees were removed and the earthen wall built on top of palmetto logs. There were 5-6 cannons pointing downstream, Pinckney Island and Port Royal Sound. 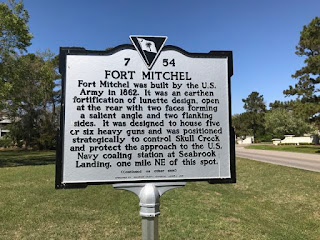 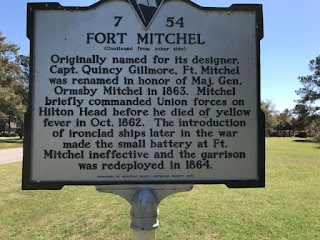 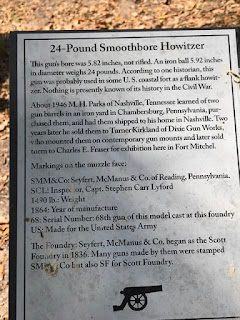 After lunch at Main Street Cafe, our final stop was Leamington Lighthouse (1879-1932) the location of Camp McDougal (1937-1944) located on Palmetto Dunes Plantation. Again, just get a gate pass when entering. The lighthouse is also known as Hilton Head Rear Range Light and still stands on the golf course.It housed a Fresnel Lens with light generated by oil lamps. 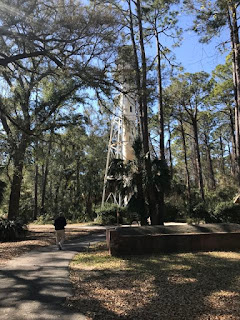 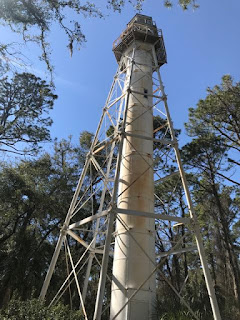 The lens had to be washed with wine every two months. Light from here could be seen 15 miles away.A hurricane in 1893 made a direct hit and water around the Lighthouse was 3 feet deep. The keeper and his daughter worked through the night to keep the lanterns burning. Unfortunately he collapsed and died. His daughter died several weeks later from exhaustion and the loss of her father. Legend is that she still haunts the Lighthouse.

In 1937, the Lighthouse became the site of Camp McDougal, used for training by the Southeastern Shore Patrol and an extensive US Marine Training Station during WWII for anti-aircraft units and defense batalions.

It was a very productive day even though very long as we left around 630AM and returned 12 hours later.