Arrival Charleston and some touring

A 200 mile drive today to our home for next 30 days, JB Charleston. We were last here in 2012.
This is a very nice campground and well maintained. We are in#20, one of the better sites for satellite and wifi. Hosts are very helpful and friendly. MWR is short walk, commissary and exchange by the Dorchester Gate.

Air Base Wing, Air Mobility Command. In 2010 it was merged with the US Navy Support Activity Charleston. The base shares runways with the Charleston International Airport. The C-17 Globemaster flies out of here.

Today we drove into town to visit the site of the former US Arsenal that is now home to MUSC ( Medical University of SC).

The Arsenal was established in 1841-1879. In 1860 it was captured by CSA forces and returned to Union in 1865. It was abandoned in 1879 and sold to Porter Military Academy in 1888. In 1964 the MUSC acquired the property of the former Arsenal and  Porter Academy. MUSC  dates to 1824 and is the oldest continually operating school of medicine in the US and oldest in deep south. There are no remaining buildings from the Arsenal.The brick wall was erected around 1825 along the four streets around the Arsenal that include Bee,Ashley,Doughty and Presidents Sts.

The Waring Library was constructed in 1894 and served as the library for the Porter Academy. It features many medical exhibits. 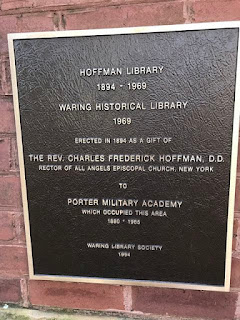 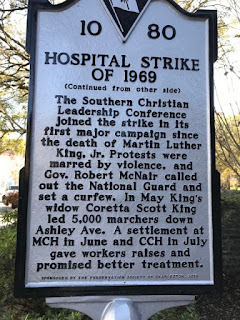 St Luke's Church sits on the corner of Bee and Ashley Sts. It is non denominational and was originally the artillery shed of the Arsenal built between 1825 and 1832. It was acquired by Rev Porter in 1879 for the purpose of educating boys orphaned and left destitute by the Civil War.Rev Porter converted the shed into a chapel. The building served the students until 1965.
In 1989 Hurricane Hugo severely damaged the building and contents. St Luke's Chapel was restored and rededicated in 1994.

Our objective today was to visit the Citadel, South Carolina's Military College. When we arrived, our timing was perfect as the cadets were preparing for the practice parade. The full dress Retreat Parade is tomorrow at 345PM which if the weather is good we will return to view. The full dress is done on Fridays at 345PM except during spring break. 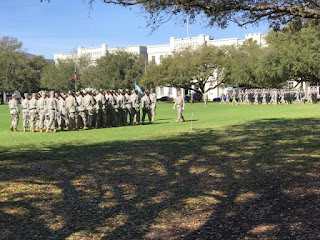 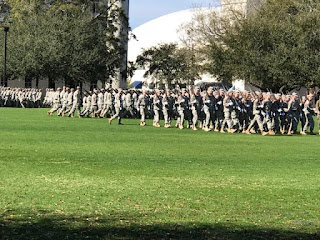 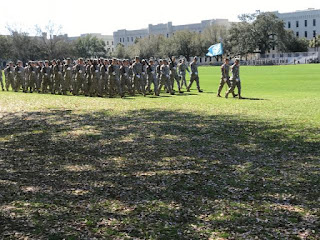 The Citadel was established in 1842 and close after the Civil War. Reopened in 1882. The first class of six cadets graduated in 1846. When Union troops captured Charleston, the Citadel ceased operation in 1865. The original site was Marion Square in downtown and in 1920 a cornerstone was laid at the present site. Today it offers 23 undergraduate degrees, 27 Master's programs with enrollment in the Corps of Cadets at 2349 with 9% women and 25% minorities.