Short drive to Folly Beach Island and James Island to look for markers and revisit to Forts Johnson and Fort Lamar.

After driving around the Island we finally located the marker in a city park by the bridge on Center Street. Folly Island was occupied by Union troops 1863-1865. General Wild's "African Brigade" made up of mostly free blacks from the 55th Massachusetts and former slaves from the 1st NC. A cemetery was laid out for soldiers who died here. Most of the graves were removed after the war. In 1987 relic hunters  discovered additional graves of the US Colored Troops. Archaeologists removed 19 burials and reburied with military honors in Beaufort National Cemetery in 1989. 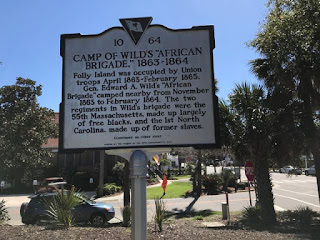 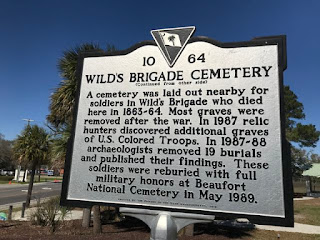 We then drove to James Island and a visit to Fort Lamar, which had eluded us on previous visits. We just happened to see a sign on our way to Folly Island. Fort Lamar is  now part of the Heritage Preserve. It was here that the Battle of Secessionville was fought on 16 June 1862 known as the First Battle of James Island. Confederate forces defeated the Union in their attempt to capture Charleston by land. All that remains today are the breastworks and some signage. We noticed a dig by the magazine was happening. 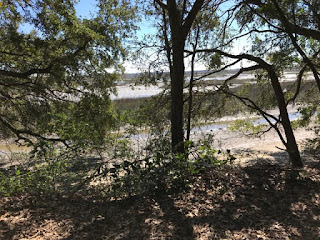 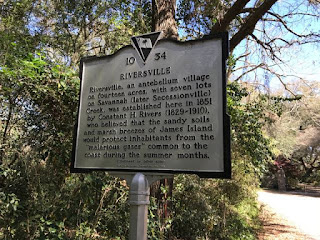 We then drove to Fort Johnson on James Island. It was from here that the first shot of the Civil War was fired on 12 April 1861 over Fort Sumter. Our last visit was in 2012. All that remains today is the Magazine and Cisterns. The fort was first established during the Colonial Period as part of the Harbor Defense of Charleston in 1630-1775. During the Revolutionary War Colonel WM Moultrie raised the SC flag in 1775-1808. In 1794-1808 it was repaired and ordered as part of the First System fortification. During the Civil War 1861-1865 Confederate troops occupied the fort. In 1864 the Confederates repulsed 2 Union regiments. In 1865 the fort was evacuated on 17 Feb 1865 as General Sherman approached Charleston in his famous march to the sea. 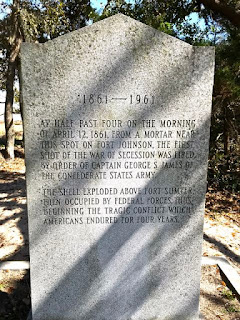 In 1970 most of the fort was transferred to the SC Wildlife and Marine Resources Department.

On another note: the campground and surrounding areas are deluged with pine yellow  pollen. Everyone says spring came early this year and this certainly proves it. Fortunately we will be able to wash the RV before we leave on the 15th. The campground charges $10 for a do it yourself wash. Wish most campgrounds had this option. This will probably be our last wash for a while. 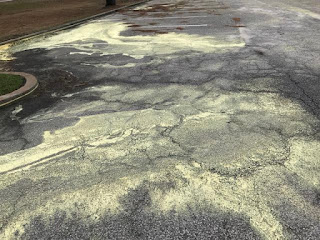 This week I finally got caught up with my travel photos DVD's..60 and 18,000 photos. Unfortunately, DVD's don't last forever and someday they will be for naught.
Posted by Amy at 2:41 PM No comments:

Visit to The Hunley

Since tours of the Hunley are only given on Saturday and Sundays due to ongoing restoration, we decided to do the tour today. The tours are guided at a cost of $14 for seniors and last around 90 minutes. It was difficult to get good pictures as it is through glass and submerged. The Hunley was the world's first combat submarine. Two prior sinkings of the Hunley were in August 1863 and October 1863 during test runs in Charleston Harbor. In the August sinking 5 crew members were killed and in October 8 crew members were killed. In the final sinking in February 1864 and final recovery in 2000 the 8 remains and 100's of artifacts were recovered.

The Hunley was manned by 8 in small confines of a 4 ft hull.  A layer of sand, sediment shells and corrosion built up over time make it very time consuming in the restoration project. It was completely masked by years of concretion. Clemson University has undertaken this project and it is not know when the project will be completed. 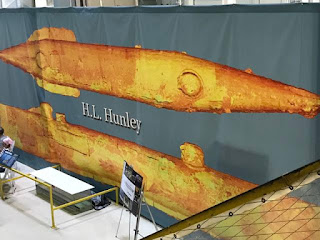 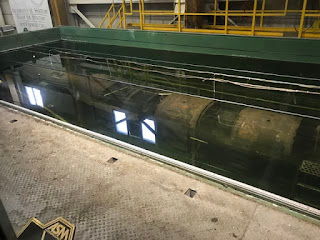 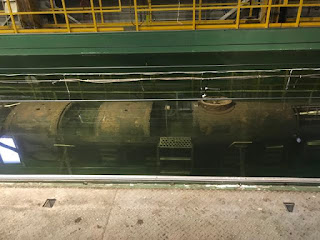 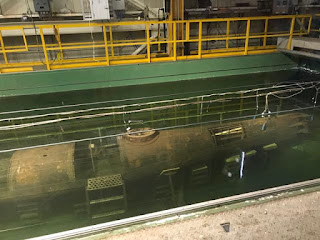 On 17 February 1864, the Hunley successfully sank a Union ship the USS Housatonic. Shortly after the Hunley disappeared with no crew members to tell the story. Survivors from the Housatonic testified that the Hunley attacked only partially submerged. The sinking may forever remain a mystery.

Among artifacts found belonging to George Dixon, commander of the Hunley, was a $20 gold coin that had saved his life in battle by adsorbing the impact of  a bullet in the battle of Shiloh in 1862. Also found was a gold watch,gold and diamond jewelry and a suspender clasp.Pipes with tobacco were also recovered.


Through forensic science, the 8 bodies were able to be identified and interred in Magnolia Cemetery along with the other 13 bodies from August and October.

We then drove down to White Point Garden Park, location of the Charleston Battery. There are some magnificent homes surrounding the park. 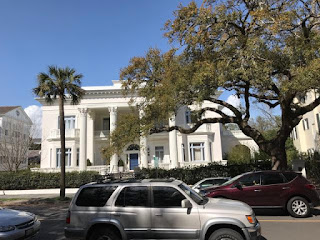 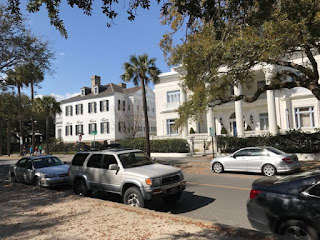 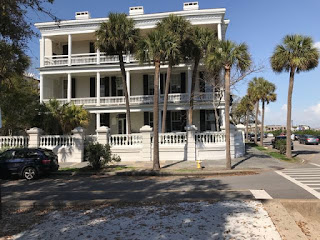 Today we took the ferry from Liberty Park next to the Aquarium to revisit Fort Sumter. Our last visit was in 2010. The ferry ride is 30 minutes through Charleston Harbor. Weather was not ideal for pictures due to clouds, but OK. 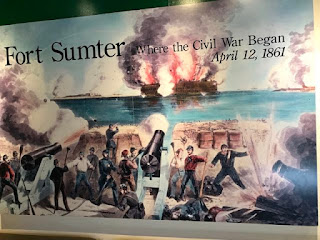 It is here that the first shots of the Civil War were fired at Union occupied Fort Sumter from James Island on 12 April 1861. The fort was garrisoned by Maj Robert Anderson who moved his 85 troops from Fort Moultrie in December 1860. At that time the fort was still unfinished even though construction started in 1829 as one of a series of coastal fortifications built after the war of 1812 by slave laborers and craftsmen.

Brig. Gen Pierre Beauregard commanded the Confederate forces in Charleston. He had been one of Anderson's students in artillery at West Point in 1837. He did not welcome the thought of firing on his old friend and instructor, but nevertheless the two day battle ensued and Anderson surrendered on 14 April 1861. Surprisingly no one on either side suffered loss and only 5 soldiers suffered injuries. Major Anderson and his garrison marched out of Fort Sumter, boarded a ship for New York having defended Sumter for 34 hours. In the battle,fire destroyed the quarters,gates and magazines. The Civil War had begun.

When the war ended in 1865, the fort was in ruins and bore little resemblance to the fort as it stood in 1861. In the years following, the Army attempted to rebuild the fort. From 1876 to 1897 the fort served mainly as a lighthouse station. Little maintenance was done and the fort fell into more ruins. In 1898 with the impending Spanish-American War, Battery Huger was constructed with the installation of two 12 inch rifles. As the war ended quickly, the guns were never fired. 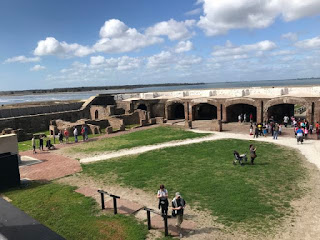 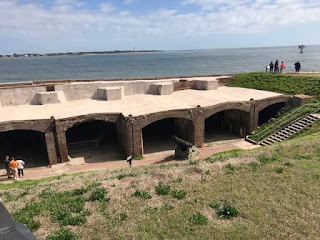 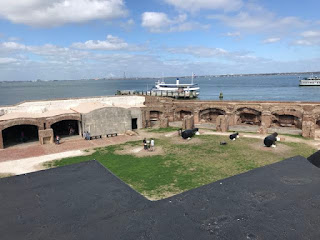 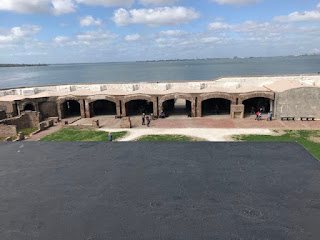 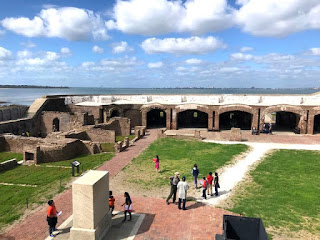 During WW I, a small garrison manned the rifles. During WW II, the fort was once again manned and 90-mm antiaircraft guns were installed. In 1948 the fort was transferred to the NPS and remains as a very popular tourist attraction. 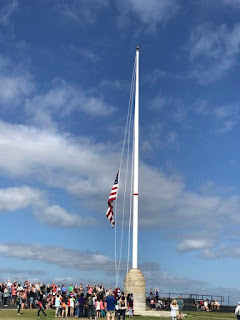 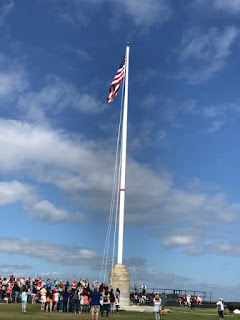 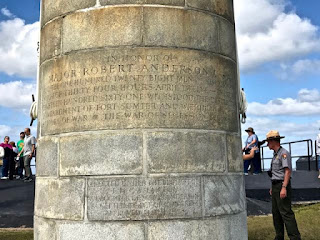 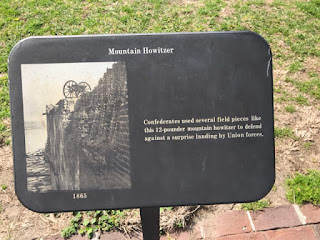 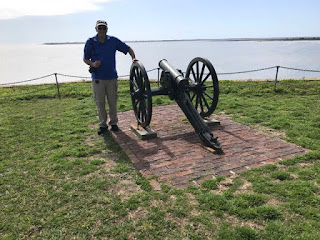 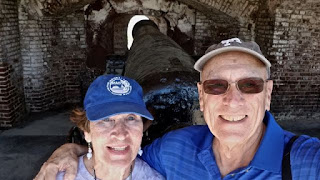 Couldn't resist kissing the frog by the Aquarium even though I have my Prince Charming. 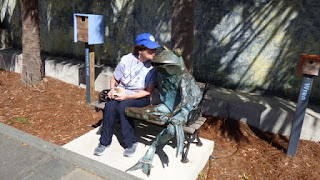