Never go a touring on a holiday weekend especially in California. Traffic was unbelievable and cars were parked on the side of the road. It was especially bad going up to the Point Reyes Lighthouse and even worse driving up to Mount Tamalpais SP through Stinson Beach. Cars parked miles away just to go the beach. We were fortunate to get a close site of the road parking place at the Lighthouse. Lesson learned.

One of the main reasons for the trip today was John's interest in former AF Radar Sites in the area. He found one at Point Reyes and one at Mount Tamalpais.

The walk to the Lighthouse is around a 1/4 mile and 300 steps down. We only did the 1/4 mile. Saw some deer on the way and huge cypress trees. The visitor center has some nice displays of the park's habitat and a petrified skull of a gray whale. It was good to have cooler weather. 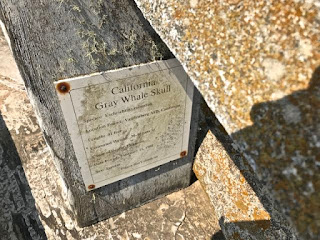 The lighthouse went into  operation in 1870 costing $100,000 and remained in operation until 1975 when replaced by an automatic beacon. The lighthouse was built due to the treacherous currents and offshore rocks. It is also one of the windiest and foggiest places on the Pacific Coast. The area has seen over 73 major wrecks with 37 total losses. The original lighthouse with its Fresnel lens and clockworks is preserved for viewing for those walking the 300 steps.

On the road out, we stopped at the RCA/Marconi Wireless Station located beyond a tunnel of Cypress trees.The station is manned by volunteers on weekends. This is the last station of its type in the USA. 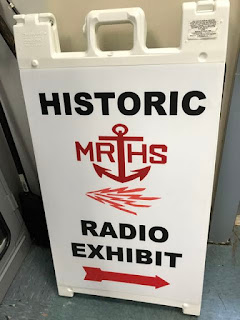 On the drive to the Lighthouse you pass many dairy farms and historic ranches. Don't believe the ads you see on happy California cows as these were not enjoying green leas, but dirt.

Did not take any pictures from Mount Tamalpais as the day was very clouded with smoke from area fires.

The Mount Tamalpais peak is 2.571 ft and on a clear day you see the Farallon Islands 25 miles out to sea, the Marin County hills, San Francisco Bay, the East Bay and Mount Diablo. The area many thousands of years ago was inhabited by the Miwok who had a rick culture and complex language. Unfortunately, their live changed after the arrival of the Europeans. Some think the peak was formed by a volcano and others think the San Andreas Fault created it. Maybe if we get a good, clear day we can return.

We have intentions of touring Half Moon Bay area and Muir Woods before we depart on the 12th.
Posted by Amy at 3:17 PM