Before leaving Elkton, we drove back to Shore Acres in order for John to do a guided tour of the Radar Site. On the way back we finally got a viewing of the Elk in the preserve near Reedsport on Hwy 38. 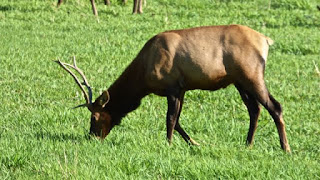 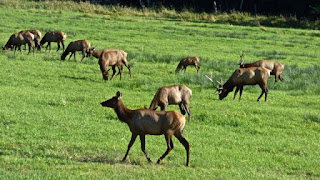 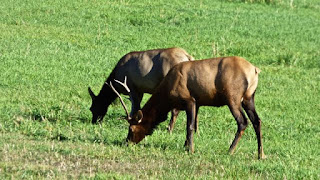 We arrived at Guaranty RV in Junction City, OR on the 20th for needed repairs on the roof and some other issues. The gratis camping across from repair has 30 and 50 amp. Couldn't resist photo of large fir tree behind the RV. 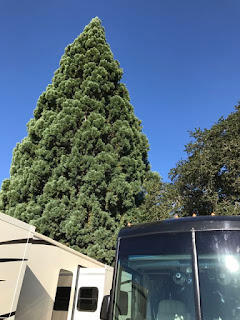 We feel comfortable having them do our repair work as they have done very good jobs in the past starting with installing our tow bar and roadmaster braking and towing system. We also purchased our 2003 Malibu from them for $5,000. Later we had them install the inverter as Camping World did a botched job failing to install a breaker box.

It is important to book your appointments as far in advance as possible. We scheduled our appointment back in March.Since our last visit Guaranty has built a new parts store that also  features a cafe and laundry. The sales staff put on a barbecue for lunch one day. Very good.

Getting back to repairs. We needed the roof resealed and any issues necessary taken care of as well as reseal the front window rubber strips. We also needed to get an estimate on repairing the clear coat peeling on the back in the bottom panel that showed hair line cracks in the fiber glass. To do a proper job the estimate came in at $3500 so we decided to postpone that until a later date.

Thanks Pat, our service manager and Randall who did most of the roof work as well as several others. A job well done.

We also  met several nice couples while we were there and hope to keep in touch with them.

Our intent when we departed today was to spend 2 nights in Sunny Valley, but as we approached the area the smoke from all the Oregon fires was very bad, so I called and cancelled. John had several places he wanted to visit in the area, but decided to press on to Red Bluff, CA where we extended our stay from 3 nights to 5. A long drive and not until we got past Weed did the smoke diminish.  We arrived at the park around 430PM.


This is a very nice park just a mile off IH5 on Hwy 38 and Chestnut. Spaces are long, gravel and full hookups. Nice office and store and pool.  With Good Sam discount around $35/nt. Most of the sites are shaded with large trees. Would definitely recommend. 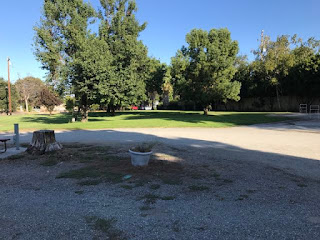 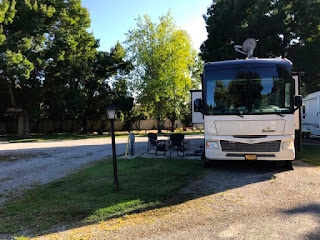 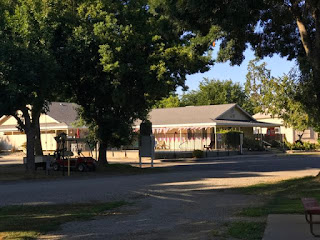 From here we are going to Travis AFB for 2 weeks. Temperatures here and down there are in the 100's. We are keeping a close eye on Texas hurricane as we have kids in San Antonia, Austin and Dallas.