Historic Markers in Wyoming and Idaho

Our drive today from West Yellowstone down Hwy 20 south to Hwy 33 east and hwy 31 to Swan Valley was scenic and only several hours. We were originally supposed to stay at Teton Valley RV park in Victor, but when we arrived they could not find our reservation and had no room. So we called Sleepy Bear in Swan Valley just 20 miles west and they had room. It is a small 8 site park on Hwy 26 just east of hwy 31. As it turns out this was really more convenient and less cost at $20/nt for full 30amp hookups with nice views. The other park was $51/nt. So all worked out just great. We will be here 3 nights before heading to Arco, ID. 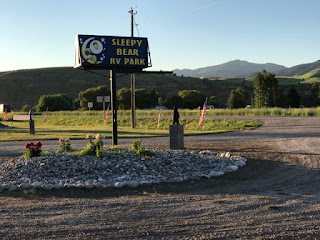 After settling in, we drove over to Pinedale and Daniel Wy..around 80 miles via Hwy 26 to Hoback Junction then Hwy 191 to Pinedale. John wanted to visit the site of Bonneville Fort, Mountain Man Museum in  Pinedale, several Green River Rendezvous site markers and monument site dedicated to Father DeSmet where the first Holy Mass was held in Wyoming.

Bonneville Fort site is located near the town of Daniel, WY on the Green River. Only a marker remains . It was established in 1831 by Captain Benjamin Bonneville as a fortified winter camp and fur trading post. It was abandoned after a year due to the frigid winds and winters.


The Green River Rendezvous consisted of six located near the town of Pinedale near the Green River. There were 16 located in other areas during 1824-1840. Most of the fur trade consisted of beaver pelts obtained from the trappers and Native Americans. Beaver pelts were in high demand for the fashion industry of Europe and the Eastern USA. It was a bartering process whereas the pelts were swapped for guns, jewelry and supplies. Every 2nd Saturday in July a reenactment is held in Pinedale.

As it is known"Prairie of the Mass", Father DeSmet celebrated the first Catholic Mass near the original Rendezvous site on 5 July 1840. Thousands of Native Americans, trappers and fur traders gathered. Father DeSmet was Belgian and a Jesuit who was very active in missionary work among the Native Americans. His travels were said to total some 180,000 miles. While at the site, I found a large heart rock for Hope.

Another Rendezvous site marker is known as Pierre's Hole on Hwy 33 in Drigg's, ID. We spotted this marker driving into Victor. It was here that the Battle of Pierre's Hole in 1831 took place between the trappers and Gros Ventres. In the end the trapper and allied tribes were victorious.

I must say Eastern Idaho has some beautiful scenery of the green rolling hills and farms. Everything looks so fertile.