More Historic Signages and Sites on Hwy 95 S in Idaho

Happy Birthday, my Love. Are you really 80? Sure don't look or act it. So happy we are together and sharing this journey of life. You bring love, joy and laughter to me. 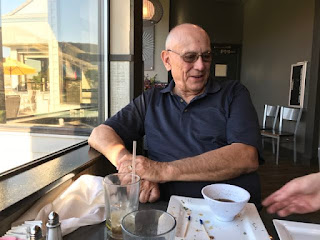 Today we drove Hwy 95 south to Whitebird,ID. Enroute we passed the Lawyer Creek Canyon Railroad Trestle.A series of high railroad trestles were built in 1908 that served the area for 80 years. Lawyer Canyon was named for a Nez Perce leader who served as high chief from 1818-1871. He lived near the canyon and fur traders gave him the name Lawyer for his talents in language and oratory skills. He died in 1876, a year before the 1877 Nez Perce War. 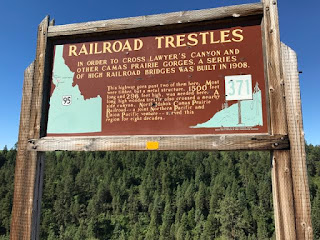 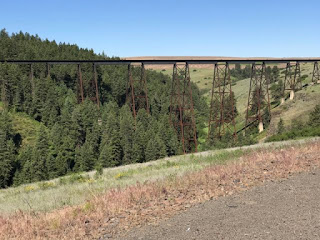 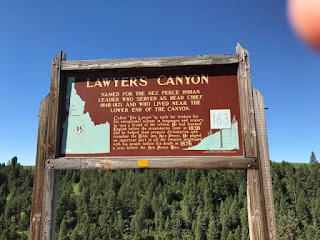 The main purpose of the drive today was for John to visit and old and now closed AF Radar site in Cottonwood. When he was stationed at Othello, WA AF Station, he was sent down here to observe. This site as with so many others, has fallen to the elements and neglect and is now abandoned. To get to the site you pass the old housing area which is still in use, the contonement which is now a state prison, up a narrow gravel rutted road pass Cottonwood ski area you finally reach the site atop a hill overlooking the Camas Valley. 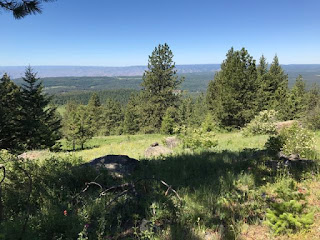 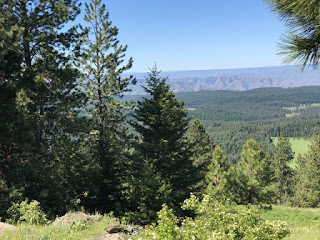 In Cottonwood there is a cute, very large doghouse with store so had to get a photo. These people are really into dogs. 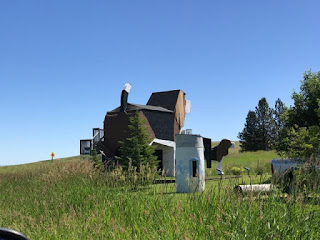 In Cottonwood we visited the Monastery of St. Gertrude and Museum. The purpose of the Museum is to preserve the heritage of the Monastery, Camas Prairie and surrounding area. They have a very nice collection of artifacts. 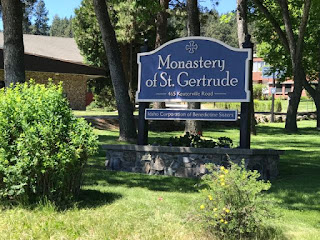 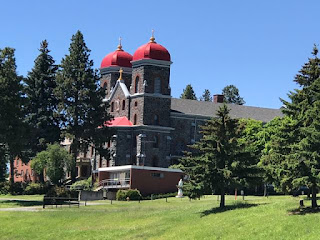 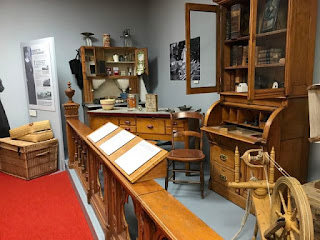 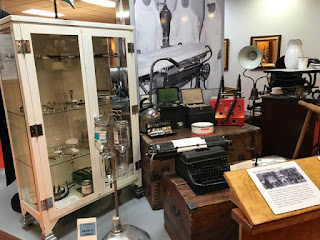 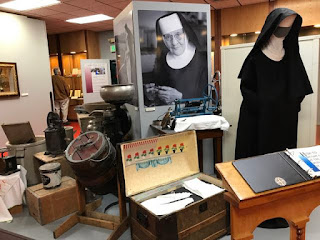 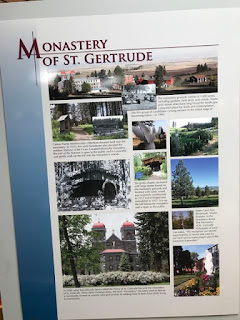 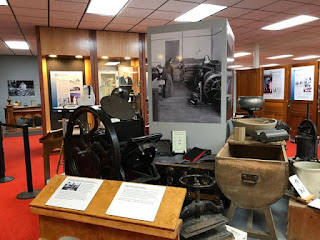 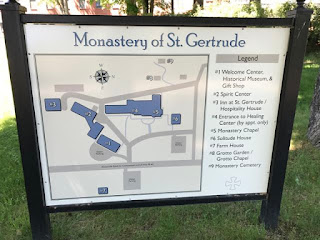 Also located on the grounds is a Spirit Center and Inn. This is a Benedictine community of Sisters. The Benedictine legacy in the Northwest began with three sisters arriving from a cloister in Sarnen Switzerland in 1882. They immediately began founding schools, hospitals and attending to those needs of the community. Their journey took them through Eastern Washington, Oregon and finally Cottonwood. where the motherhouse was founded in 1906. 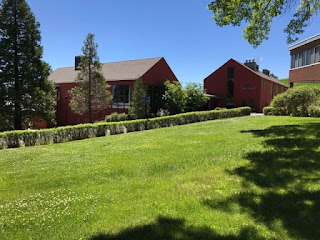 Our next stop was the site of the Cottonwood Skirmishes between the Nez Perce and US Army  3rd and 4th July 1877. 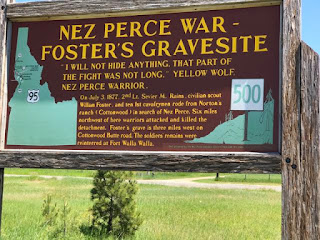 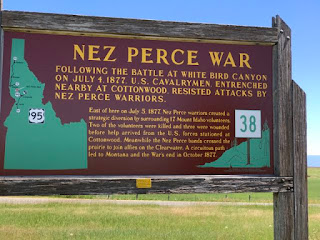 Camas Valley Prairie was the last gathering place of the Nez Perce before the war of 1877. 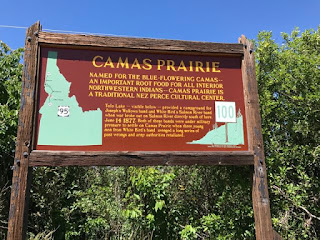 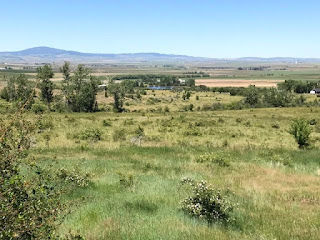 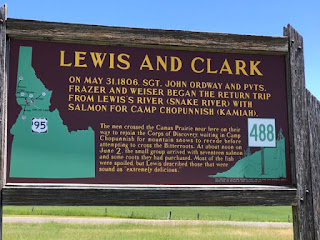 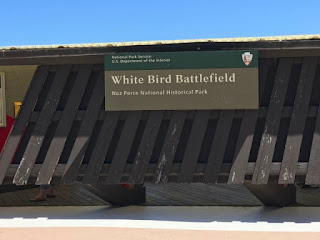 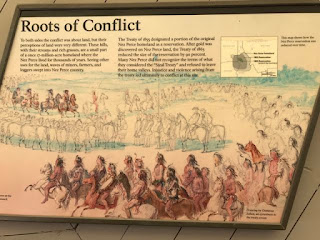 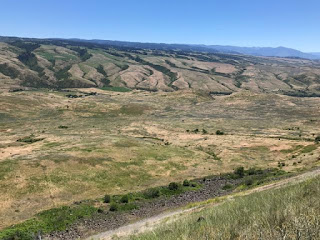 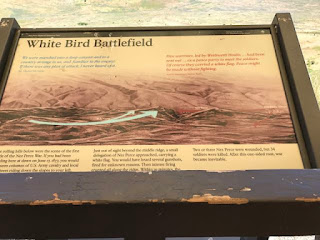 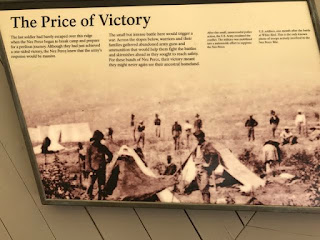 While we were in the area, we intended to drive to the Pittsburgh Upper Landing for a view of the Hell's Canyon Gorge,After traveling on a winding, gravel and unmarked lane road for 6 miles with another 10 to go, we decided to turn around. Fortunately we did not pass anyone as it would have been a tight squeeze with no railings on the side. There are many boat trips to take, but they are very expensive and long. Maybe if we had a better vehicle, we might have continued. 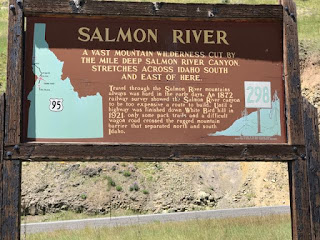 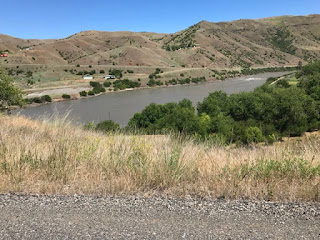 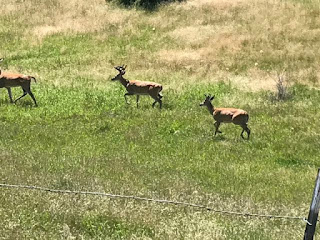 Returning home, went to dinner at The Quay a few blocks from the campground on Port St.

Tomorrow we move to our site for next few days before going back to original site. Huge Fantasy tour group coming in.

If my timeline on visits seem out of order..they are. technically you should do the tour starting in Lewiston going south on Hwy 95 and back to Hwy 12. That would make for a very long day.