A drive today to Hope, ID and Thompson Falls, MT around 200 miles rt taking us down Hwy 200 from Sandpoint ID.Purpose of the drive was to locate markers in Hope and Thompson Falls relating to David Thompson and Northwest Trading posts.


Hope ID is a very small town on Hwy 200 with a population of 85. There was a marker just off the highway and the actual site is now private property on the peninsula with no marker or remains. A very expensive home is being built on the property. The House was built in 1809 by FinanMcDonald under the direction of David Thompson of the North West  Company as a fur trading post.

Our drive to Thompson Falls was another 80 miles on the Hwy 200. On the r0adside just past the town were two markers for the Saleesh House and a cairn about Thompson. The site of the trading post was several miles away and again no marker or remains. sales house. This was also a fur trading post in 1809 by Thompson. It consisted of 3 log buildings. It remained open until 1820.


The Cairn reads: David Thompson 1770-1857,Pioneer Geographer who built Salish House in 1809 named by the Native Americans "Koo-Koo-Sint" the man who looked at the stars.


In Thompson Falls we stopped at the Dam which is the Falls. Guess I was expecting a cascading falls flowing down the mountain. This is a small town on the Thompson River. 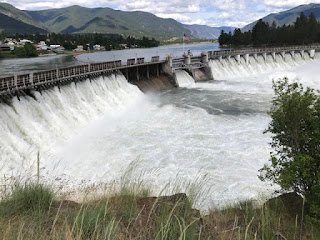 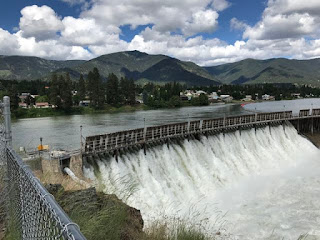 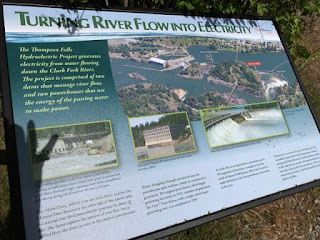 Before we depart on Tuesday, want to visit the Kootenai Falls and Swinging Bridge and also the Kootenai Wildlife Refuge and several other falls in the area. Just hope weather proves good.