Fort Worden and Beyond

We boarded an 845AM ferry from Keystone over to Port Townsend for a visit to Fort Worden in order to visit the Harbor Entrance Command Post which is only open certain days of the year. On our last visit it was closed and John wanted to get photos and tour for his website. This was our 4th or 5th visit over the years. 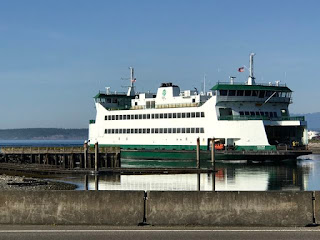 While waiting for the ferry spotted an eagle, Guillemot and took photo of the Fort Casey Campground. 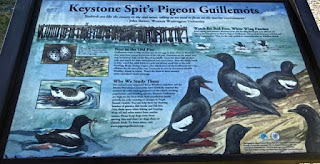 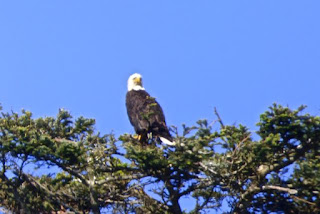 It is only a 30 minute ride and spotted a cruise ship and sailing ship.


Since the upper part of the post is only accessible by foot, we parked the car below and hiked up to the batteries and artillery hill..about a 30 minute up hill walk. Once at the top we viewed some of the batteries and the old radar station. 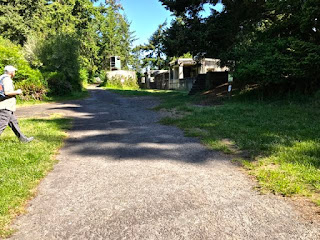 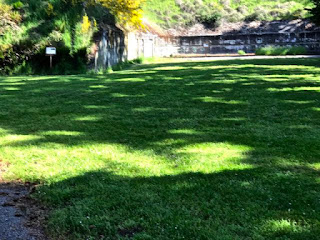 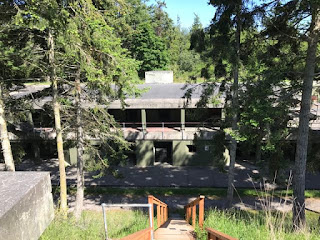 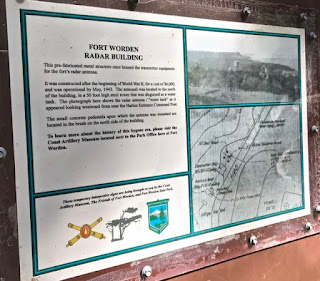 When we got to the command post, John realized he had lost his folder containing layouts and maps. I retraced our steps back to the Radar Station and sure enough there it was hanging on a bush. Found a short cut back to the post where John was already taking the inside tour given by Alfred, When we got back to the car several hours later, we had done some 12,000 steps or about 5-6 miles. So glad it was a nice day and not too hot. 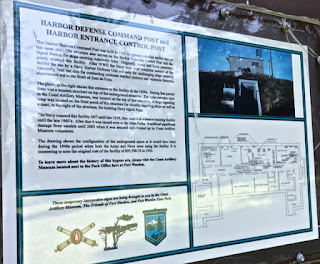 Fort Worden 100 years ago was home to over 1,000 troops defending  Puget Sound and one of 3 forts that once made up the Coastal Defense  System erected between 1898 and 1917 as part of "The Triangle of Fire". The area affords scenic views of Strait San Juan de Fuca and snowcapped mountains. Many of the remaining buildings such as officer quarters have been repurposed for lodging, education, conference venues and cafes. There is also a campground. The park has many hiking, biking and beach areas. Strongly recommend purchasing the Discovery Pass for $30/annual fee..otherwise each time you visit a State Park it is $10/day  pass.  When in the area also visit Fort Casey on Whidbey Island and Fort Flagler south of Port Townsend.  RT ferry ride from Keystone with vehicle and passenger is around $28. Also,there is a nice care  across from Ferry in Keystone. Since we arrived early for the ferry, got a breakfast sandwich and coffee.

We then drove East to Camp Hayden as John was trying to find a battery located in another area from the Camp.Well, the GPS took us up an old logging road full of pot holes and deep ruts..some 5 miles. Unfortunately,the battery was not visible from the end of the road. Surprisingly, our 2003 Malibu made it with no problems,but not a drive I care to do again.

Camp Hayden overlooks th Strait of Juan de Fuca and was built during the early 1940's to beef up the coastal defense system of WWII and located at Tongue Point. This was our 2nd visit since 2009. Adjacent to the camp is a SP campground.

Time was drawing near and we had a 2 hour drive back  to the 645PM ferry. All in all it was a productive day.

Lopez Island in the San Juans

A very nice day to take the ferry over to Lopez Island, another island in the San Juans we haven't visited. This visit will leave Shaw Island as we have visited Orcas and Friday Harbor on San Juan Island.


We took the 1035AM ferry  from Anacortes over which is a 40 minute ride and the cost is $44 rt for car and passenger. You cannot book return trip, but get in line 30 to 40 minutes prior to departure.. We tried to get the 135PM departure, but due to a traffic accident, we were delayed and then had to wait for the 500PM departure. So we decided to have lunch at Buckey's and ride to some other areas.

There is not much to see on the Island..geared more for hiking and bicycling as well as tent camping. We did take a mile hike to Shark Sanctuary. Pretty views, but no sharks. The Island is known as "the friendly isle" with a population of around 2,000 that swells in the summer. It is around 29 square miles, rural with rolling hills and a small village of restaurants, shops and museum.  There is also a 6 acre organic vineyard. 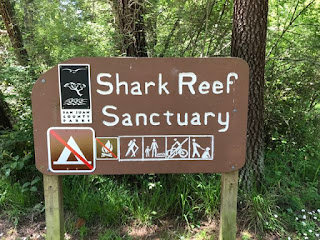 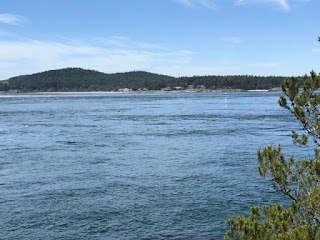 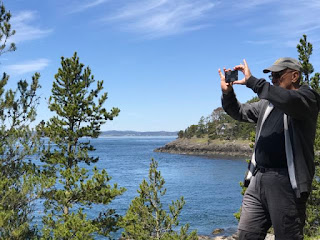 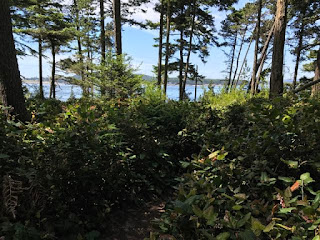 On the ferry from Lopez to Anacortes. 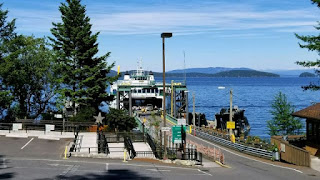 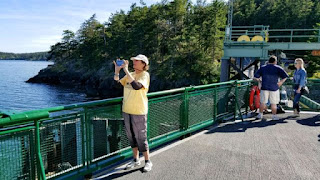 Tomorrow we are expecting gale force winds up to 50 miles/hr. Time to secure items outside.

Saturday we are taking the ferry from Coupeville/Keystone to Port Townsend for a revisit to Fort Warden and Hayden and sights in between. Good weather is predicted.

We depart on 1st for a night in Ellensburg enroute to Fairchild AFB in Spokane and then on to Bonner's Ferry ID.

Fort Ebey SP and Other Things

Sunny days ahead so maybe we can do some things before we depart on the 1st. Had a beautiful sunset last night.

Today we drove down to the Coupeville Ferry stopping at Fort Ebey SP enroute. We have visited here before, but John was interested in trying to find the old WWII Radar Station. There are no signs or info in the brochures about this and even the park ranger did not know of its existence. Our only source to location was what John found in his research and on google maps. After hiking from Battery 248 along a narrow path, we were unable to determine exact location as it so overgrown and no paths to hike up to what may have been the site. The park campground is somewhat near the site, but not accessible. 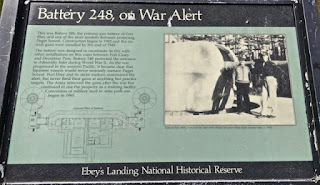 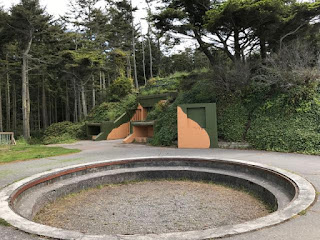 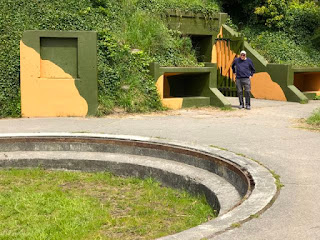 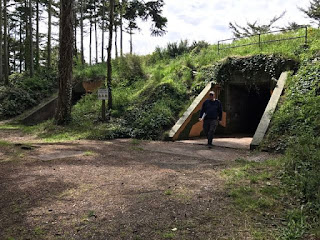 Fort Ebey had two 6" guns which were lated melted down for scrap. The Fort had a barber shop, library, barracks, bowling alley and fire station. The battery is accessible for touring.

The park has several deer, beach and hiking trails. Seems the deer are small..maybe due to inbreeding. They are also friendly. 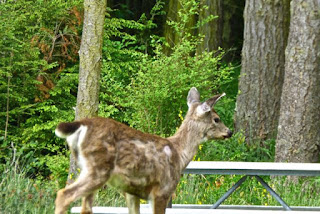 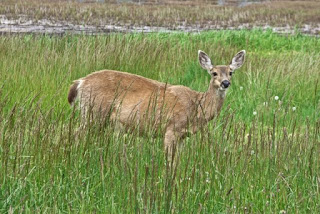 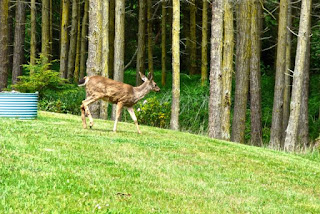 We then had lunch at the cafe by the ferry dock and made a brief stop at Fort Casey. We have been here at least a dozen times, but John wanted to see if any improvements have been made to the fort. Seems they are working on the Battery restoration.

Earlier in the week we drove into Mt Vernon in order to try and match fabric I found at Hobby Lobby in LV. Decided to make two more panels for the curtains. Fortunately found the fabric which is being discontinue. Reduced to $7/yd. When we get back to Hope's, will have her sew for me. In the meantime did a temporary fix with fabric tape.

We also did some revisions on our trip to Newfoundland in 2018. Decided instead of going back through Maine etc, we would go from Moncton NB to Gaspe QC, Riviere du Loup, St Jean sur Richlieu,QC, Kingston Ont and Mississauga Ont before going into USA at St Clair MI. Since this will probably be our last trip in the area, we really wanted to tour the Gaspe.

Earlier in the week we were asked to move from our prime spot #5 to #6 just behind on row 2. Reason being that MWR purchased 2 trailers from Camping World for rental and it was decided by someone in MWR to move them to sites #4 and 5 which are ideal for Motorhomes for pull thru with connections on left side..the only 2 sites in park for this..otherwise if your motorhome wants to face Strait,you have to drag hoses under except for row 2 which are backins.

Was told these rentals will go for $85/day..Seems somewhat costly. Don't think campground staff is happy about this decision. Oh well, we do have partial waterview as opposed to full view.

Laundry room has map of area and islands to the west as viewed from campground. Sitting in front of map  is Love made from Driftwood. Vancouver Island to West and Campground in  bottom rt corner.


Earlier in the week we drove into Anacortes and saw this cute raccoon posing under a car. 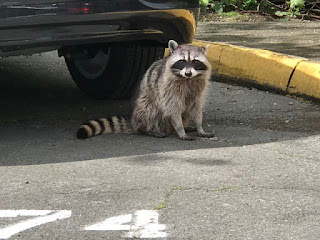 We will soon be here a week and 3 more before we depart. I keep saying this is our favorite park and for so many reasons. Our week has been mixed with rain, wind and sunshine, but not  to matter as the beauty of the park and vistas does not deter from the weather. Enjoy the walks through the forest and beach, checking on the resident eagle family who like to position themselves on the tree up on the hill.

The parents now have two juvenile eaglets and recently learned that the female has white on her tail.  I never tire of watching them and taking photos.

Found some more heart shaped rocks for Hope on a beach walk. She is making a heart shaped rock garden. It is fun to look for them and the many sand dollars I have found on the beaches in California.

Anyway, here are more photos of the campground. To all our military RV'ers, you are missing a great campground if you have never been here.