As an after thought today, we drove down Hwy 12 to Three Forks and Missouri Headwaters State Park..the official start of the Missouri. The Missouri starts at the confluence of the Jefferson,Madison and Gallatin Rivers. Lewis and Clark visited this site on 28 July 1805 and named the rivers after the President and secretaries of treasury and state. 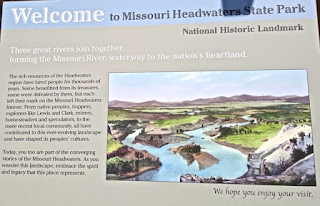 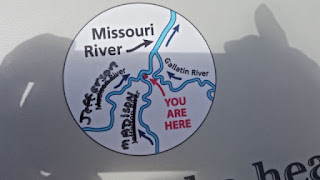 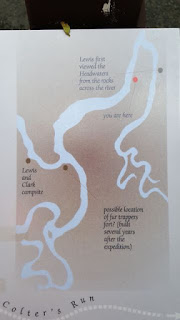 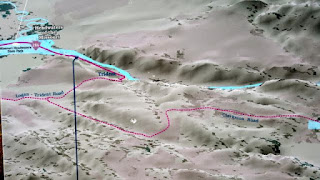 The Missouri River is said to be the second longest River in North America flowing east and south for 2,341 miles before entering the Mississippi north of St Louis. Some say it is the longest.

The drive down Hwy 12  south to IH 90 was very scenic passing acres and acres of amber wheat fields and to the east Canyon Ferry Lake. Even though I had packed us a picnic, when we passed Wheat Montana we couldn't resist stopping for lunch and to purchase a loaf of good Montana Wheat bread. We have stopped here before on one of our trips. It is just off Ih 90 on Hwy 12 at Three Forks.

Returning home we met Rocky and Loretta for dinner at Montana Grill and Cafe. We were so engrossed in conversation that I failed to ask the waitress to take our picture.  Rocky and Loretta have been married for almost 52 years and have led a very adventuresome life with many laughs and experiences. Rocky is retired from the Air Force and they have resided in many countries. A very interesting couple. So glad that we have them as friends and know we will for years to come.

After dinner, they followed us back to FamCamp for more conversation and sharing of experiences. Also sharing motorhome stories of the good and bad. I gave them list of all the places we have stayed since 2009.

Tomorrow we depart early for Fairchild AFB in Spokane for 2 nights, then on to Ellensburg, WA for 3 nights before one of our favorite spots..Naval Air Station..Whidbey Island for 3 weeks.