On our way to Fort William, we stopped at the Terry Fox Memorial. It is very moving to read of his short life and determination in his quest to raise money for cancer. The memorial overlooks Lake Superior in a beautiful setting. It was in Thunder Bay that his quest to finish his run across Canada was halted due to the return of his cancer that had spread to his lungs. Nine months laster he passed away, one month short of his 23rd birthday. 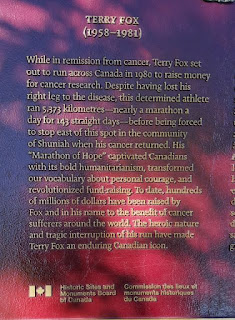 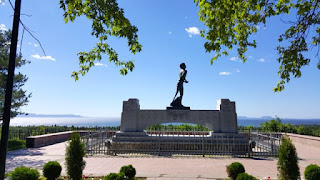 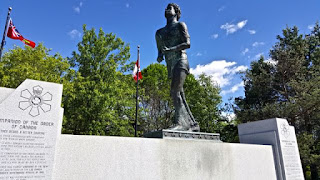 Terrance Fox was born in Winnipeg in 1958. He was a Canadian Athlete, humanitarian and cancer research activist.

In 1980 with one leg having been amputated, he embarked on a cross Canada run to raise money for cancer research awareness. His goal was to raise $1 from each of Canada's 24 million people.When the cancer returned in 1980, he was forced to end his run after 143 days and 3,339 miles. He started his run in Newfoundland the hope of reaching Victoria,BC. He had raised $1.7 million by the time he was forced to abandon the Marathon across Canada. At the time of his death in June 1981, over $23 million had been raised.. The Terry Fox run over the years has raised over $600 million for cancer research.

There are many memorials in Canada named after him including roads,streets,schools, buildings.statues, trails,parks, a mountain in Canadian Rockies and the Terry Fox Hall of Fame to recognize persons who have made contributions to improve the quality of life for disabled people.

If you are in Thunder Bay, please stop by the memorial. Also google the many websites about his life.