Our time in Sault Ste Marie, ONT is drawing to a close as we head north tomorrow on Hwy 17 to WaWa, ONT for 3 nights. We have enjoyed our stay at the KOA, a very nice and well managed campground.

As we drove the roads in the area, we noticed stacks of rocks atop the granite ledges and other places and learned that these are called "Inukshuk" meaning in the likeness of humans in the Inuit language or otherwise known as "someone was here" or "you are on the right path". Should have taken a photo.

Sault Ste Marie is one of the oldest settlements in North America and is the 3rd largest city in Northern Ontario.The name means in French Saint Mary's Rapids. Sault meaning rapids on the St Mary's River. A mission was established in 1668 by French Jesuits with fur trading posts soon after making it one of the oldest European settlements in Canada.

Only disappointment was not seeing any bears, moose or other critters during our stay. Only the fake ones at the ice cream shop down the road. 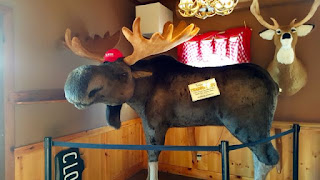 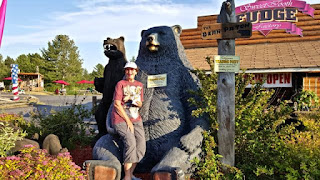 It is raining today, but that doesn't deter our morning trip to Tim Horton's for coffee and donut.

Tomorrow on the way out of town we will have the oil changed in the RV at TMS.