The State Park is just over the border and features several short and long hiking trails to the various falls and rapids.We chose the mile long hike to the Big Falls. The waterfall is 120 ft, the tallest in the state on the Pigeon River. The park is leased to the state by the Grand Portage Indian Reservation.


The entrance to the Visitor Center has a plaque that explains the forming of Minnesota and how the lines were drawn.


The Grand Portage National Momument has a very nice Visitor Center overlooking Lake Superior with a short walk to the North West Trading Company stockade and great hall that has been rebuilt. Also the warehouse and canoe barn and kitchen. From 1784 to 1803, the company's inland headquarters located at the Grand Portage was the largest fur trade depot. The post was abandoned in 1803 after the company, owned by Scots, but operating on American soil, relocated northward to avoid complications of citizenship, import duties and licensing. When the area was surveyed 20 years later, only the remains of the 16 plus buildings were obscured by vegetation and fallen trees. 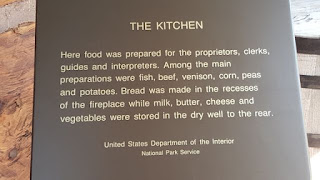 The post was also the site of Rendezvous, an annual gathering by everyone connected with the company. Food and liquor flowed freely landing some in jail due to fist fights and drunkedness. On the final nigh there was dancing and feasts by the partners in the Great Hall, while outside the post Voyageurs and Ojibwa stage their own celebration. 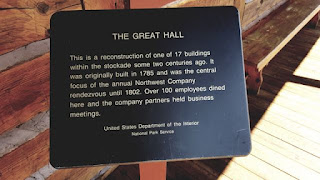 All trade goods coming from Montreal and all fur trade going to Montreal came through the Grand Portage. It took voyageurs several hours to carry  two 90 pound packs along the 8.5 mile portage from Fort Charlotte to Lake Superior.

It was a grueling voyage, carrying the canoes and two 90 lb bales over the portages. Totalling some 3,000 miles the routes of the north men from Lake Athabasca and the Montreal men to Lake Superior with over 100 portages as long as 13 miles was not without sacrifice. They met with discomfort,disease and drowing in the icy waters of Canada's wilderness. 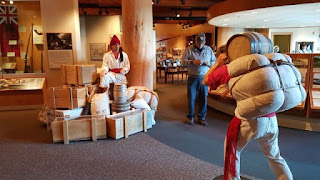 
In 1821, the North West Trading Company and the Hudson Bay Company merged putting to an end their violent feud over competition.