Today we took the 3 hour Georgian Bay Cruise from Parry Sound, a 2 1/2 hr drive from Sturgeon Falls. A 2 hour cruise is also offered in the morning. The Island Queen is a 550 passenger,132 ft ship with 3 decks and departs at 100PM.


On the first deck is a monitor to follow path of cruise.


The cruise affords a magnificent view of Georgian Bay and some 30,000 islands, which is the largest concentration of fresh water islands in the world. You get up close views of the cottages and homes and remote wilderness passing granite shoals into narrow channels and shallow waterways. This ecosystem so unique has earned the World Biosphere Reserve status from the United Nations. 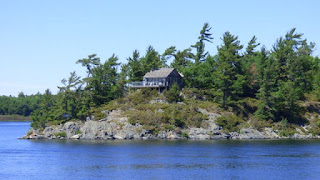 Georgian Bay is a large bay of Lake Huron located entirely in Ontario, Canada. It is 120 miles long and 50 miles wide making it 80% as large as Lake Ontario.Most of the 30,000 islands are located along east side. Wikipedia has a very interesting article on the Bay.

The cruise takes you from Parry Sound through the Hole in the Wall channel, just wide enough for the Island Queen to fit with its 80 ft granite cliffs.The "hole" is between Huckleberry and Wall islands.

Next passing past Killbear Provincial Park, one of Canada's most popular summer parks with sandy beaches, huge granite cliffs and 631 campsites and other activities. The island park is also know for the many Massasauga Rattlesnakes. They are a protected species and the parks in the area also have signs warning to brake for them.
Foxsnakes are also on the Island.  Instructions for spotting a rattlesnake:
Let someone know immediately, have someone watch the snake until park staff arrives, report a poacher and drive slowly. I say bring in the mongoose.


We spotted an osprey nest when passing through Five Mile Narrows. 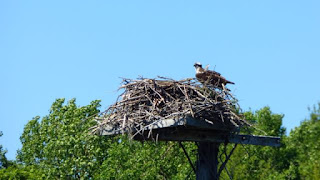 The picture below from the brochure shows the wildlife on the islands. 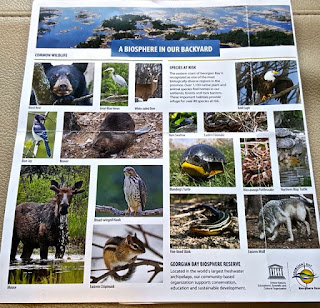 Returning to port,we passed by the Rose Point Swing Bridge. The captain gave 3 horns to alert for the opening. The bridge connects the mainland to Parry Island. 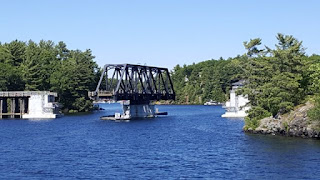 After the cruise, we walked over to Boston Pizza for dinner. Arrived back at campground at 800PM.

It was a good day. Tomorrow it is going to rain,spoiling many events for Canada Day. Saturday we depart for Sault Ste Marie,ONT for a week.