Before departing Thunder Bay, we did a walk around Marine Park last night. It affords a very nice view of Lake Superior and the marina.

We have a long 6-7 hour drive today to Kenora, Ont via Hwy 17. We passed many lakes and rivers and small towns. Seems to be an anglers paradise with many lodges, fishing and hunting camps along the way. A very nice drive, but no wildlife sightings.

We arrived at The Willows RV Park around 3PM and found the campground to be very nice with long pull thru full hookup sights, free wi-fi and satellite accessible. It is convenient off Hwy 17 and only 15km from town. There are several small lakes in the park. We are in site B2.

Kenora, originally name Rat Portage due to the heavy population of muskrats is the second largest city in Northwestern Ontario. It was also claimed as part of the Province of Manitoba. A long lasting argument known as the Ontario-Manitoba boundary dispute  was finally settled in 1889 ceding Kenora to Ontario. Gold and railroad were important in the early history of the community.

The town sits on Lake of the Woods and during Prohibition, it served as a smugglers route for the transport of alcohol.  There are some 14,522 islands in the lake.Today tourism and recreation are very important to the community. Lake of the Woods sits in Ontario, Manitoba and Minnesota. Its deepest point is 310ft at Whitefish Bay, is 85 miles long and 56 miles wide with an area of 1700 miles. If you included the 14,522 islands, it would have a shoreline of 65,000 miles, more than Lake Superior. It is definitely a boaters paradise. 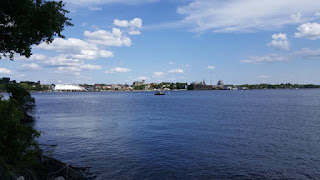 One of the most photographed sites in Kenora is "Huskie, the Muskie" erected in 1967 becoming the town's mascot. From the platform you can see the Rotary Goodwill Geyser. The Geyser propels 250 ft of water and erupts every 15 minutes during the summer. 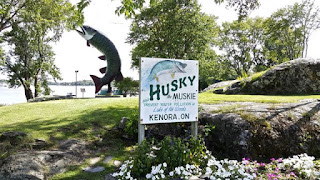 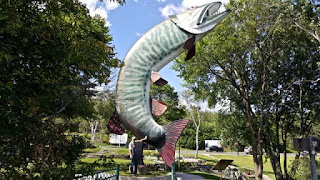 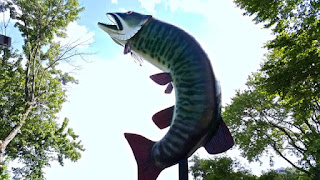 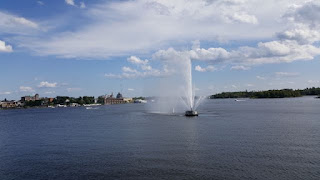 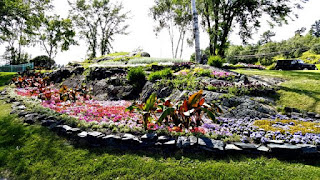 After settling in, we drove into town and had dinner at Boston Pizza. Wanted to visit the museum, but they were closing so we will go back tomorrow. Viewed some of the 18 murals and Rat Portage Plaque. 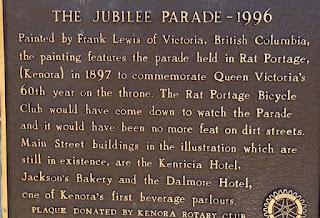 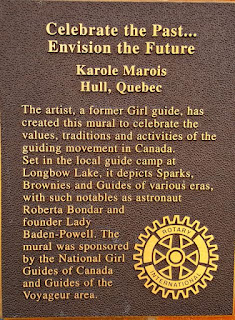 Weather is not so good for our two remaining days which is a disappointment since we wanted to drive down to Fort Frances, Ont and International Falls, MN. We also wanted to do boat tour on the Lake.

We leave for Winnipeg on Monday until the 6th of August.