This morning before the rain, we drove over to Fishkill to see the Van Wyck Museum Homestead. We were only able to walk the grounds as the museum is only open on Saturday and Sunday. 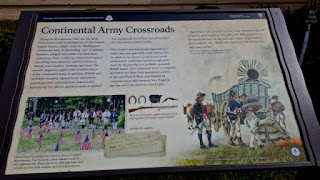 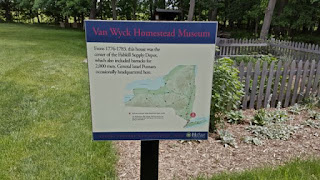 Fishkill begins in1683 when merchants Rombout and Verplanck were given a grant of 85,000 acres. They bought the land from the peaceful Wappinger Indians for all the land they could see. After Rombout's death, his title passed to his daughter who was the wife of a British Naval Officer. In 1732 she sold 959 acres to Van Wyck who built a 3 room house.

The house was requisitioned by the Continental Army as officers' headquarters during the Revolutionary War. Many notables including Washington visited here as trials were held and orders issued for the army. It was also used as a quartermaster depot for outfitting the Continental Army. There were many structures on the land in the ensuing years and after the war, the house reverted to the Van Wyck owners with the descendants occupying for 150 years.

After the suicide of Sidney Van Wyck in 1882, the property fell into the ownership of two more families. The last family sold it to the Historical Society for $1.

New York played a very  important role in the Revolutionary War as more than 1/3 of the battles were fought here.

We have visited on previous trips Fort Ticonderoga and Fort Stanwix as well as Washington's Headquarters in Newburgh and other historic sites. The Hudson River Valley played a pivotal role in determining the outcome of the war.

Upon returning home, due to the rain and drop in temperature, we turned on the heat. Can you believe yesterday we were sweltering and today chilly.