In spite of weather, we decided to do a tour of Mansker's Station and Bowen House in Goodlettsville,TN just a few miles from the campground as we depart tomorrow.

The present site of Mansker's Station is a reproduction of the 1779 fort settlement typical of early Cumberland lifestyles.The first Station was located on the present site of Kroger and the 2nd location was on the site of Publix Grocery. Kasper Mansker,a long hunter from Virginia, settled the area in 1780 and built his first station. Due to increasing attacks from Indians, the settlers would leave in the winter for Fort Nashborough in Nashville.Shortly after leaving the first station it burned to the ground. In 1783 when he returned he built his second station where he lived with his wife, Elizabeth and helped form the local government. In 1812 at the age of 62, he volunteered to serve. Upon returning from the war in New Orleans he lived in Sumner County until his death in 1821 at the age of 75. 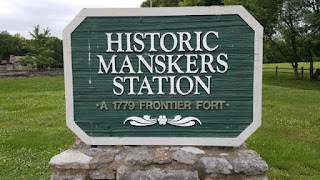 Located on the grounds is the Bowen House, the oldest brick house in Middle Tennessee was built in 1787 by Captain WM Bowen. Bowen was a veteran of Lord Dunmore's War of 1774, the French and Indian War of 1754 and the American Revoluntionary War. His son later lived in the house and his grandson<Brigadier General WM Bowen Campbell who served as governor of Tennessee was born in the house in 1807. The house was restored in 1976. The family cemetery was found on the property in 1995 and restored.


Captain Bowen was awarded land grants for his military service and he and his wife lived in the house with 10 children.He died in 1804 and Mary in 1827. Their son, William Russell Bowen who was a doctor sold the home in 1835. The house then through a series of ownerships was used as a tenant house until 1960. Due to deplorable conditions it was abandoned until in 1975 the Goodlettsville American Revolution Commission decided to restore it. Today most of the woodwork is original.

We were given a very informative tour by two guides. Thank you.