Taking advantage of a break from the rain and clouds, we drove to Fort Payne in Alabama via the Lookout Mountain Scenic Byway. The Byway takes on many different highway route names such as 157,48,117,89,176 and 35. Suggest you get a map from the Visitor Center in either TN or AL. Most of the route is in Alabama south of IH 59 and passes through TN and GA for short distances. The Byway goes from Chattanooga to Gadsden AL. 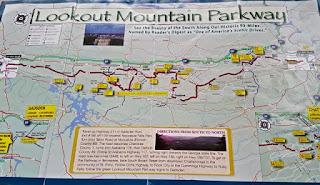 Fort Payne is off the Byway via HwY 11 from Mentone AL. After leaving Fort Payne, we drove down Hwy 11 to the Dogtown RD in order to get on the 176 loop to Little River Canyon and up 35 to 89 and Mentone for lunch.

Fort Payne had its beginnings with a frontier fort built in 1838 during the US governments removal of the Cherokee from their homes and land in Alabama, Georgia, Tennessee and North Carolina to Oklahoma or better known as The Trail of Tears which resulted in the deaths,disease and starvation of thousands from the tribes. The fort was occupied by Alabama troops from April until October of 1838 when the last of the Cherokee were removed. This was the only "Trail of Tears" route originating in Alabama. The only remains are a chimney and well . 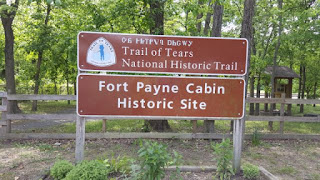 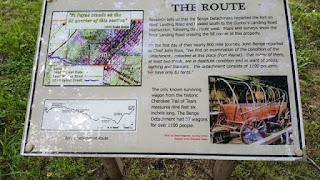 Continuing on our tour we stopped at Gracie Falls plunging 113 Feet below into the Canyon, Little River Falls and some interesting rock formations. 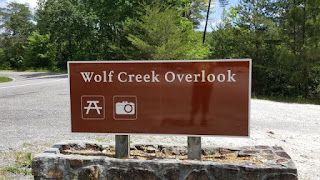 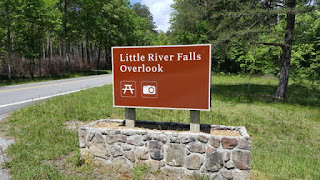 We stopped in Mentone at the Green Leaf Cafe for lunch. Mentone is a quaint mountaintop village dating back to the 1800's. There are some very nice homes, B&B's, rental cabins and close to Cloudmont Ski and Golf Resort.

After lunch we decided to take IH 59 back to Chattanooga as the weather was displaying black clouds and rain warnings.