Today we visited the Chief Vann House and Fort Mountain in Chatsworth,GA.  In the years my parents liven in Chatsworth I had never visited the Vann House, only passed by it many times. Fort Mountain is where Daddy wanted his ashes scattered,which Mother and my brother Sean and I did in 1998. The day we scattered the ashes, a deer appeared across the road. Unfortunately, I could not remember the exact spot.

Another reason fort visiting the mountain was to visit an ancient stone wall built centuries ago mayby Native Americans for ceremonial and religious reasons or Welsh explorers. Another theory is that it was built by Spanish conquistadors. The Cherokee legend states that it was built by "Mooon Eyes", a race of light skinned peoplewho could see in the dark. As no artifacts have been found,the building has been left to speculation. 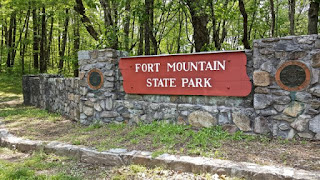 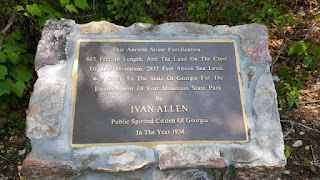 The Vann House built by Cherokee Chief James, the son of a Scottish father and Cherokee mother.James became a very influential Cherokee gaining great wealth with various businesses along the Federal Road. He was also responsible with his support of establishing the Springplace Moravian Mission that provided education to the Cherokee children. 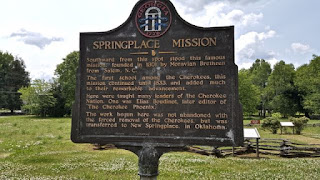 In 1805 the family moved into the new home. He had many children,but left his estate to Joseph who was 11 at the time of his father's death by a fatal gun shot at Buffington's Tavern in 1809. The murderers were never found. Eventually in 1814 the estate was settled and Joseph at age 16 inherited the house, land and all the businesses. Joseph was  victim of the Indian removal and forced to flee north to a farm he owned in Tennessee. In 1836 the family made their way to Webber's Falls OK where he built another mansion with money received from the Federal Government as restitution in the amount of $20,000. In 1844, he was killed aboard his steamship as it was leaving Louisville for New Orleans at age 46. 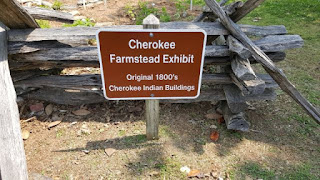 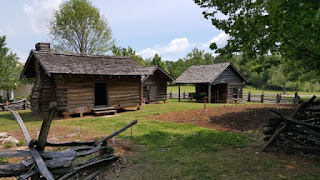 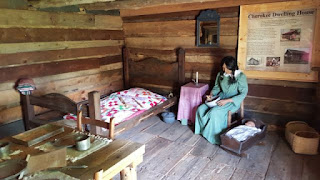 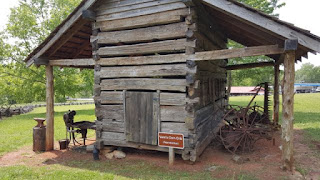 The Vann house has been occupied by several families until the 1940's. The home was purchased in 1952 and presented to the Georgia Historical Commission for restoration. The Vann descendents donated priceless antiques and heirlooms.The Vann house was dedicated in 1958 with 42 descendents in attendance. The furniture in the home as also been donated or purchased as the original furniture was taken by the Vann family when they departed for TN.

This was the largest and most prosperous plantation in the Cherokee Nation. The site is only open Thursday-Sunday.