Today we drove down to Franklin TN to visit the Carter House and town. We then drove over to Murfreesboro to visit Stones Rive National Battlefield and Fortress Rosecrans. Will do separate blog on Stones and Rosecrans.

Franklin is just south of Nashville on IH 65 with much history, many historic homes, a nice community with shops,galleries, wineries and just an overall pleasant atmosphere. I am sorry we did not have more time to tour. 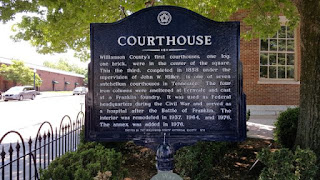 We visited the site of Fort Granger and  The Carter House. Wish we had the time to visit Carnton Plantation.

In February, 1863, General Rosecrans ordered General Granger to fortify Franklin. During Hood's attack in November 1864, artillery fire slammed into the Confederate right flank. The fort was abandoned when the Union retreated to Nashville. Earthworks remain with signage.

Carter House was at the center of the battle of Franklin and was used as a Union command  post. The engagement only lasted 5 hours with more generals dying than in any other battle and more Confederates killed than in Pickett's charge.Bullet holes are still visible in the home. There were 9500 casualties, 2000 dead, 6500 wounded and 1000 missing.

The home was built by Fountain Branch Carter in 1830. The Carter family had 12 children, 8 boys and 4 girls.  His farm grew to 288 acres including a cotton gin. In 1860 his net worth was $62,000 and he owned 28 slaves. At the outbreak of the war in 1861, he had 3 surviving sons two of whom were wounded and lived into the 20th century. The youngest son, Tod was mortally wounded and died on 2 December 1864 in the battle of Franklin. Fountain died in 1896. He willed plots of land to his children, grandchildren and former slaves. The farm was sold in 1896 and in 1951 it was saved by the State of Tennessee and is operated by The Battle of Franklin Trust.