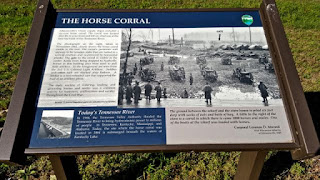 Today we are driving north to Clarksville, Dover and Johnsonville to visit several forts and battlefields.

I will include Fort Defiance located in Clarksville and  Johnsonville Historic Park in this blog even though Johnsonville was after Fort Donelson.

Fort Defiance in Clarksville, TN is a Civil War Park and Interpretive Center with earthworks and cannons. The fort is located 200 feet above the Cumberland River. The area was originally inhabited by Native Americans centuries ago. Settlers began arriving in the late 18th century and it became a trading post and settlement.During the Civil War, Confederates chose the hilltop to erect a fort to defend the river approach to Clarksville. In 1862, Union forces captured the fort and used it for the remainder of the war. The site was also a magnet for runaway slaves and freedmen. They found work in and around the fort.


Johnsonville SHP is located on the eastern bank of Kentucky Lake (Tennessee River) in Tennessee. The park features exhibits focusing on the 1864 battle fought here, two preserved Civil War fortifications and earthworks. The town was named for Andrew Johnson who served as Tennessee's Union Military Governor during the Civil War and became the 17th President after Lincoln's assassination in 1865. 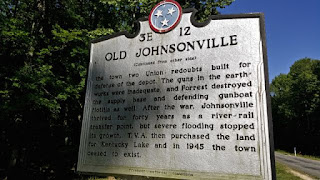 Union leaders built a huge supply depot which at the time was known as Lucas Landing and in 1863, Union General Rosecrans ordered completion of a single track Nashville and Northwestern Railroad constructed by nearly 7,000 African American civilians. In may 1864 the Union Supply Depot was completed.  Union soldiers constructed a redoubt equipped with artillery and rifle pits to protect from a Confederate attack.


On 4 November, 1864, Confederate General Forrest attacked Johnsonville from across the river upon anchored Union Naval ships and supplies on the riverfront. Fearing capture, Commander Thompson ordered the burning of naval transports docked at the wharf. The fire spread and quickly consumed most of the depot's buildings causing more than $6 million in damages. After the battle, some of the depot was rebuilt as well as a second larger Redoubt. After the Confederate defeat in Nashville in December of 1864, the Union abandoned Johnsonville.


After the war, the town saw success as a railroad town and existed for another 80 years until in 1944 when the TVA flooded the Tennessee River thus forming Kentucky Lake .