After leaving Fort Loudoun, we drove the short distance to drive the Cade's Cove Loop in the Smokies near the town of Townsend. Since we have a grandson named Cade, couldn't pass the opportunity to visit. It is in an isolated valley first settled by Europeans in 1819. Some of the cabins, churches and buildings have been preserved by the NPS. The loop road off Highway 321 takes you to the oneway loop road with several stops along the way including the Visitor Center. Be prepared to travel only 5-10 miles and hour as this road is heavily traveled with tourists. The 11 miles takes around 2 hours with stops. At the beginning of the loop, you can stop at a kiosk for a map. 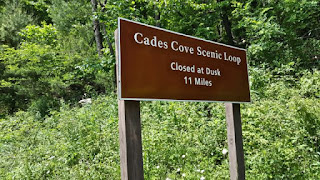 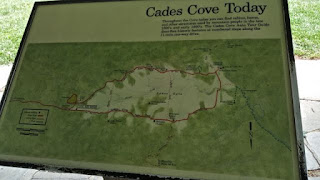 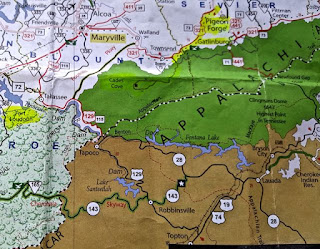 The visitor center features a store, museum, working grist mill and other historic buildings brought here from their original sight.


Although there is no evidence that Native Americans lived in the Cove, there is evidence that they hunted in the area many years before the first settlement. It is named after a Cherokee Chief.

Gristmills were the Cove's first industry closely followed by blacksmith shops and distilleries making peach, apple brandy and corn whiskey. Farming consisted of corn, rye, wheat, tobacco, vegetables and fruit. They hunted bear, venison, squirrel, grouse and rabbit. Fish were abundant from the streams and rivers. A favorite wild food was chestnuts gathering up to 20-30 bushels in a good year. This  was also a favorite food of the animals. Unfortunately due to an Asiatic fungus early in the 20th century sweeping down the Appalachians, most of the Chestnut trees died between 1925 and 1940.

In 1850 Cade's Cove reached a population of 685 (132 families). In the 1860's the population decreased to 275 rising again in 1900 to 708. By the 1940's many of the remaining residents left the Cove after the states of Tennessee and North Carolina bought the land and gave it to the federal government for park use. Those that stayed and accepted little money for their land could remain until they died, but their descendants could not. The last school closed in 1944 and the post office in 1947.

Although the park abounds with wildlife, we did not see any. Guess there were too many motorists.