Today we took a short drive on the Blue Ridge Parkway from Peaks of Otter to Indian Gap around 40 miles. On a previous trip we drove 30 miles on the northern end. The Parkway is a total of 469 miles from Rockfish GapVA on the northern end to Cherokee NC . Construction began in 1935 and completed 52 years later. There are 26 tunnels on the drive, with many hiking trails, viewpoints, picnic areas, camping sites. The Parkway links Shenandoah and Great Smoky Mountains. Part of the Appalachian Trail goes through the Parkway from Indian Gap to Cherokee. 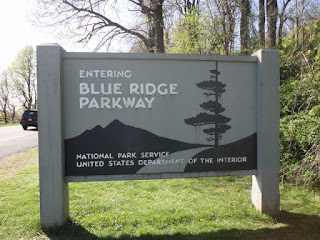 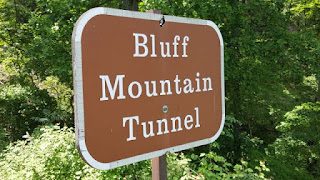 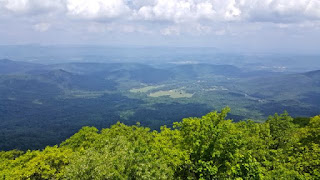 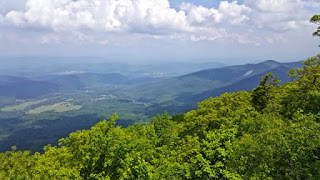 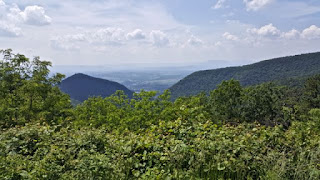 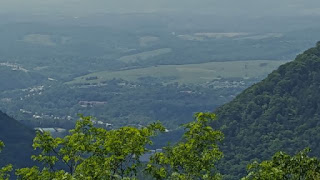 Once again, did not see any wildlife.

We drove the 125 miles to Petersburg Battlefield .For some reason when we were last here in 2012, I failed to have photos or write a blog. Can't figure that one out. John has pics. Must have been in a fog that day. Did not take many this time as it was brutally hot and I only stopped at Visitor Center and few stops on driving tour.  Learned the next day on news that parts of the battlefield have recently been vandalized by seekers of artifacts and they heavily damaged area around one of the batteries. Guess there is a huge market on ebay for relics. In my opinion, all relics should be protected and donated to museums by the park service. Some abusers of property have no regard for the importance of the history and respect for lives lost in the battle. Sure hope they find the vandals and prosecute to the fullest.

Robert E Lee commanded the Eastern Front of the battleground and Ulysses Grant the Western Front. Grant felt that the key to taking Richmond is Petersburg in order to cut off the five rail lines and supply lines to Richmond for Lee's army. The siege began in June of 1864 and lasted until April 1865 (292 days). Lee realizing that defeat was near, evacuated Petersburg. Seven days later he surrendered his Army of Northern Virginia at Appomattox Court House.


The following are exhibited in Museum. 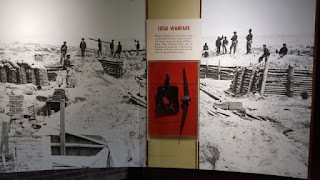 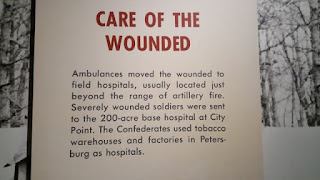 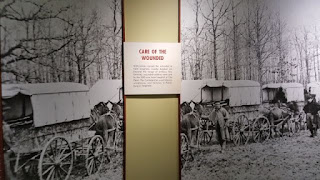 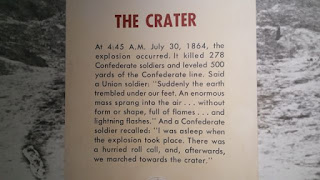 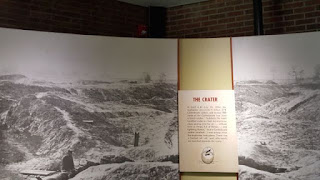 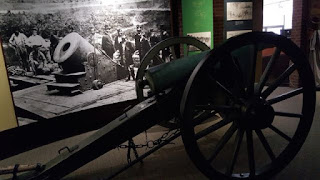 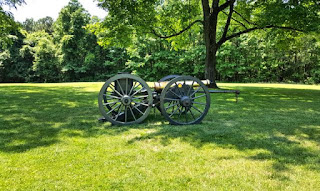 The battles and siege of Petersburg involved more than 180,000 soldiers and produced over 70,000 casualties. Best estimates are that Union suffered 42,000 casualties and Confederates 28,000.

I have not gotten into the logistics of the 292 days of battles as it is very complicated for a non military person to describe. There is so much written that for those interested, go to the internet.

A 5 hour drive from Knoxville via IH 40 to IH 81 and exit 217 to Stoney Creek campground. The campground is on a small lake around 10 miles from the interstate near the town of Greenville.

Must say our initial impression was not good as we were led to our site #62. What appeared to be trash thrown into an area, I later learned was for recycling. Should have mentioned this when we checked in. There are many long term residents who do not take care of their RV's and have a lot of stuff outside. I realize I am a neat person who takes pride in maintaining our motorhome and may be viewed as a snob, but filthy is no excuse...after all soap and water are cheap.Letting mold and dirt accumulate  is no excuse. The sites around the lake seem nice, but very expensive. We do have full hookups, but no cell service at the sites or cable tv..they are working on it as well as the road into the campground. We are parked next to a 5th wheel that appears to have been here for sometime and they have at least 3 dogs who bark.


The campground is full for Memorial Day Weekend. Guess this type of camping is just not for us..so we have decided to leave on Monday instead of Wednesday. The owner did come by and I related my thoughts to him. John felt I was too critical.

Feel this could be a good campground with stricter rules and related this to owner. He has had it for 10 years and they are trying to improve with road coming in, getting cable etc. They are not sure how to solve the cell phone issue.

Our last stop of the day was the Mabry-Hazen House in Knoxville. Calvin Chappelle gave us a very informative tour. He is also the executive director of the house. Thank you Calvin. 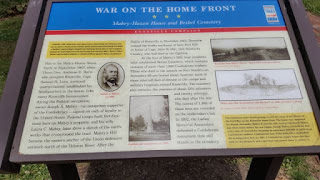 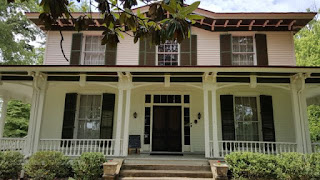 Joseph Mabry built the house in 1858 on the highest hill in Knoxville with the site being occupied by both sides during the Civil War. Interesting to note that Mabry pledged $100,000 to outfit the Confederates, but in 1864 signed an Oath of Allegiance to the Union. Mabry was a land speculator and president of the Knoxville and Kentucky Railroad. By the 1870's his business ventures mostly failed leaving him heavily in debt. A business deal gone wrong resulted in his being killed along with his son in 1882. Thomas O'Connor,a banker, who fired the first shot was also killed. The story about the gunfight was popularized by Mark Twain in "Life on the Mississippi".His son Will was killed earlier in a bar room brawl.


Descendants of Joseph Mabry continued to live in the house until 1987. The home is the only historic house in Knoxville with the original family collections of antiques, furniture and other items. Antiques range from 1700's to early 1900's.

After visiting Sevier's Farmstead we drove into the city to visit James White's Fort across from the Women's Basketball Hall of Fame.


The fort is the birthplace of Knoxville and the land given as a gift to White for his service as a Captain in the Revolutionary War. The original log cabin was built in 1785 on 1,000 acres of land  given to him by the State of North Carolina. More cabins were built and fortified behind an 8x10 ft stockade housing nearly 100 people.  The wall was built mostly to keep out wild animals.In 1791 the land grant was laid off into the Capital of the Territory South of the Ohio River,thus the beginning of Knoxville. By 1800 he had 125,000 acres. Land was selling for 1/4 cent acre. In his family he had 7 children.

White had a very friendly relationship with the Cherokee as he was their negotiator for treaties and posed no great threat to them.

In 1796 Tennessee became the 16th state with Knoxville as its capital. By then the town had grown and he did not living among large numbers of people, so in 1793 he left and went upriver to another plantation where he died in 1821.

The house and  kitchen are original with the other buildings a restoration and opened to the public in 1970.