Our first really nice day in several weeks, so decided to drive the back roads and do some fort and marker visits within 100 miles of Montgomery.

Just 30 miles north is Fort Toulouse-Fort Jackson operated by the Alabama Historical Commission set in the forested bluff at the junction of the Coosa and Tallapoosa rivers in the town of Wetumpka. Many have let their mark on this site including Prehistoric Indians, French Marines, English Traders and American Soldiers. It was at this intersection of trade routes, treaties were signed and nations held each other at bay. It was also an important trade route.


In 1717, the French were invited by the local Indians, the Alabama, to build a fort here to be garrisoned by French Marines to establish trade and good relations with the Creek confederacy. The fort was named Toulouse after King Louis XIV's legitimized son. By the 1740's the quality of life had improved at the fort  and the Marines married French wives from Mobile or local Indian women. By the end of 1763,the French lost all control at the end of  the Seven Years War also known as the French and Indian War. The area came under British control and later abandoned.


This weekend volunteers were in period costume and demonstrations were given. The children were so adorable in their costumes and seemed to enjoy the day.

Our next fort stop was Fort Mitchell south of Phenix City on Hwy 165. Yes, that is correct spelling.

The Visitor Center has some interesting displays. The fort has been reconstructed with  the only original building, the Crowell Whitaker cabin built in 1840 on the property.  The first Fort Mitchell was built in 1813 and the second in 1825.The 1813 fort was built following the massacre of Ft Mims during the War of 1812 in which the Creek Nation has sided with the British against the Americans.


In 1817, the Federal Government set up a Trading Post at Fort Mitchell to provide food and supplies for the Indians in exchange for furs. In 1825, the Indian Agency was moved to Fort Mitchell to keep peace. In 1865 the Fort became the 15th Alabama Regiment during the Civil War.

For 10,000 years this area was home to the Indian. Today there are no living groups in the area. In 1836 some 8,522 persons were gathered at Fort Mitchell and taken to the Oklahoma Territory to live the rest of their lives. 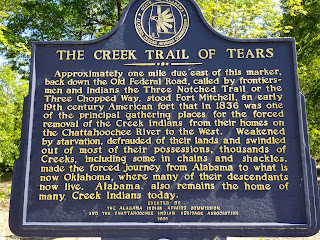 In the early 1800's,the US signed a treaty with the Creek Nation to use and widen a footpath for a route between Ft Hawkins in Macon GA to  Fort Sims in Mobile AL that is known as the Federal Road in order to reduce time by 2 to 7 days from using the Natchez Trail.

If you want more history on the forts, go to John's webite http://www.fortwiki.com