Barbeque and Drive to Next Campsite in Rossville GA

A belated 75th birthday dinner as the restaurant was closed yesterday. Dreamland Restaurant was recommended by a docent at the Confederate White House for the best barbeque in Montgomery. 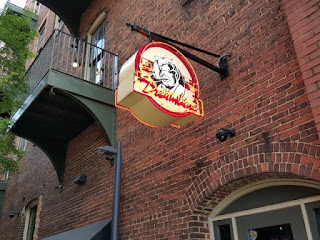 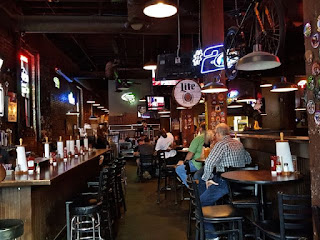 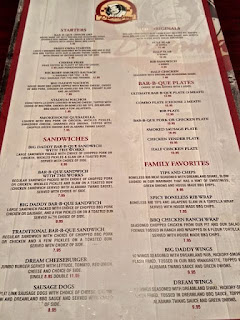 On the way into the restaurant we passed a plaque of the Union War Prison . 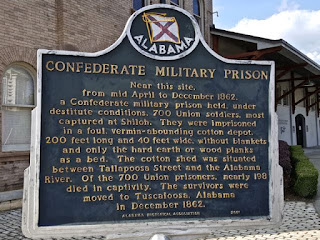 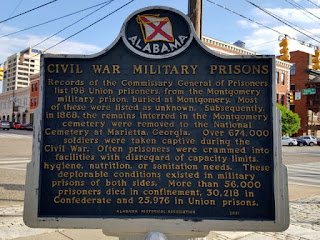 We decided on the combo plate of ribs and sausage with baked beans and cole slaw.well, John got the Mac & Cheese instead of the baked beans, but I shared with him.  Food was delicious. In the course of the dinner, we decided to depart tomorrow instead of Thursday due to weather of thunderstorms.  Called the campground and they were able to accommodate us in the same site.

Our drive today toward Chattanooga was pleasant taking IH 65 to IH 59 IH 24 and just across the TN stateline on IH 75 to Rossville GA arriving at Holiday Travel Park. We have a very nice site #138 with full hookups. The campground is located on a Civil War Battlefield. In the southwest corner stands a monument to the 84th Indiana Volunteer Regiment placed after the Civil War. The north-south streets are named for Civil War Officers, streets at the North end named for Union Commanders and the South end for Confederate Generals. Other streets are named for battles.

Chattanooga's name comes from a Creek Indian word meaning "rock coming to a point". It is also home to the first Coca-Cola Bottling plant in the world.

I remember coming through here as a small child with Mother and Daddy. In fact, it was here that Daddy bought me a camel coat which I am sure he could not afford, but made the sacrifice.

This area, too, has much history and we will in our two weeks try to visit as many sites as possible. Our last trip was in 2010, but only for a few days. We plan to explore TN,GA and more of AL within 150 mile radius.